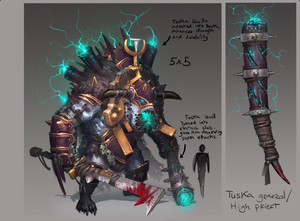 Concept art of the Airut shaman

The airut shaman is a powerful airut that is currently occupying Mazcab. It is a general of Tuska's forces, similar to Beastmaster Durzag.

According to the fifth stone fragment, the airut shaman "wields a dreadful magic, spreading corruption where he walks and warping the minds of his victims." He is known for being responsible for binding Yakamaru with mind-controlling magic.

The airut shaman was mentioned at RuneFest 2015 as a possible concept for a future Raids boss. The boss would have used mystic, Tuska-based magics to create illusions and misdirection to assault its foes, while also still using conventional melee-based attacks.[1]