Trinks is a Goebie who can be found in the village Kanatah on Mazcab. She offers tasks for the player, up to maximum of three different tasks per day.

Using a trinket on Trinks will yield a strange glowing orb. 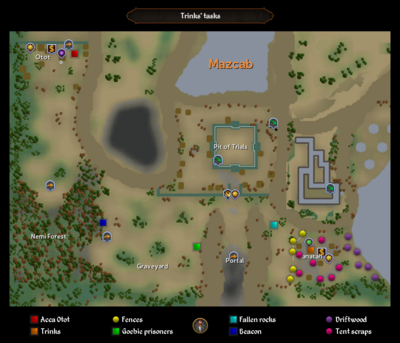 Tasks give 15 reputation each to the player, and the player can complete up to three tasks per day (for a daily total of 45 reputation). This reputation gain is affected by the Unexpected Diplomacy relic power, meaning each task will instead award 16 reputation (for a daily total of 48 reputation) if the relic power is active. Tasks are given in a random order and vary from player to player. This repeatable content has a soft reset, meaning the next day's tasks will only become available after a player has logged out or switched worlds.

This information has been compiled as part of the update history project. Some updates may not be included - see here for how to help out!
Retrieved from ‘https://runescape.wiki/w/Trinks?oldid=35892542’
Categories:
Hidden categories: