From the RuneScape Wiki, the wiki for all things RuneScape
Jump to: navigation, search
This article is about reputation on Mazcab. For other reputation systems, see Reputation.

Reputation is an asset for players amongst the Goebie civilization. Reputation unlocks various rewards at Acca Kanatah and Acca Otot.

Reputation is not spent and will not be lost. Instead, rewards are automatically unlocked upon reaching a reputation threshold. Reputation cannot be gained after 5,000; however, all activities that give reputation can still be performed.

Having the Unexpected Diplomacy relic power active at the mysterious monolith at the Archaeology Guild increases every reputation gain by 10%. 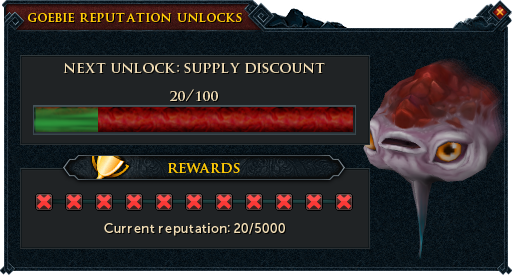 Beastmaster Durzag and Yakamaru drop three items that can be redeemed for reputation. These can also be purchased from the Travelling Merchant's Shop when in stock. If a player already has the maximum reputation of 5,000, it can be traded with Fetcher for the same amount of teci.

Some actions only yield reputation the first time they are completed:

This information has been compiled as part of the update history project. Some updates may not be included - see here for how to help out!
Retrieved from ‘https://runescape.wiki/w/Reputation_(Mazcab)?oldid=35508509’
Categories:
Hidden categories: