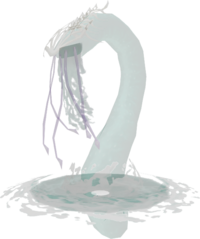 Image of Yakamaru are mirages of Yakamaru, which are fought during the "mirage" phase. Once Yakamaru reaches 50,000 life points, he will split into four images of himself, each one occupying one of the four specialty pools on the shore. The middle pool is left empty.

Each image copies whatever ability of the pool they are occupying, in addition to summoning jellyfish. If a mirage is not interacted with, it will fling "dangerous projectiles" dealing 2000 damage to each player. For this reason, one or two players stay up north to be in combat with the northern mirages, so that they do not fling projectiles at the rest of the team killing the southern mirages.

When the mirage reaches 0 life points, it will leap into the air and begin to spin. While the image is spinning, the team has 5 seconds to block the pool of water beneath it, either with planks or sand. Planks are items obtained prior to the mirage phase, while sand is automatically provided when closing the pool. Planks are used to block the sharknado and damage reduction pool, while sand is used for the tendrils and quicksand. If the pool is not blocked in 5 seconds, the mirage will leap back down, recover all of its health and needs to be reduced to 0 again before attempting to close the pool.