From the RuneScape Wiki, the wiki for all things RuneScape
Jump to navigation Jump to search
The Old School RuneScape Wiki also has an article on: osrsw:Mountain Camp

The Mountain Camp is the current settlement of the migratory Mountain Tribe and is located near the Troll Stronghold. It is also the focus for most of the Mountain Daughter quest. Locals will address players who have completed The Fremennik Trials by their Fremennik name. Players who have started A Fairy Tale II - Cure a Queen can quickly access the camp by entering the code ajr, or use a Slayer ring teleport. The player must then run north-west past the Musician and climb over the Rockslide to the east. To gain access to this city before the completion of the Mountain Daughter quest, you must bring a rope and take the north path, then climb the cliff side. Before the re-vamping of Trollheim, players would use a rope on a boulder, then climb down.

Due to its remote location and lack of resources, Mountain Camp is rarely visited by players. The only non-quest uses are for some treasure trail clues, and as the second location to find Philipe after the Carnillean Rising quest for extra xp reward points. He may be found just outside the camp near the agility entrance. 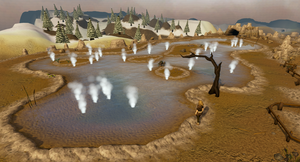 The Mountain Tribe were once part of the Fremennik people. As the Fremenniks settled down and built the village of Rellekka, they felt that the people have grown complacent and that they depend too much on their tools - weapons and armour - than their inherent skill. The Mountain Tribe eventually split, believing their migratory lifestyle kept them closer to nature than their Fremennik counterparts. Shortly before they left, they stole an ancient relic of the Fremennik, the Ancient Rock, souring the already tense relationship between the two.

Hamal, their leader, chose the mountainous region for their camp as it was free from the troublesome trolls and the "delvings of the deformed dwarves".