From the RuneScape Wiki, the wiki for all things RuneScape
Jump to: navigation, search
The Old School RuneScape Wiki also has an article on: osrsw:Mountain Tribe

The Mountain Tribe is a group of formerly nomadic people that inhabit the Mountain Camp in the mountain range in the eastern Fremennik Province. They were formerly a wandering tribe, but have recently settled due to the disappearance of one of their people. 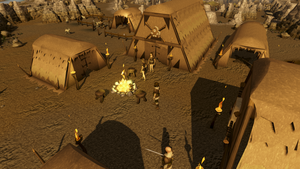 Some years after, the Fremenniks discovered a rock that was revealed to be Rune Essence. This caused a great struggle within the tribe; some believed the Fremenniks could use the magics of the essence to defend themselves from the races that were constantly seeking to conquer their land. Others believed that the rock was not to be used by mortals, and that the gods would destroy them if they used it. The tension grew until many more Fremenniks departed for Lunar Isle, where they would form the Moon Clan.

Taking advantage of the Fremenniks' temporary weakness, the Mountain Tribe attacked Rellekka, taking with them the rock, which they also believed sacred. The two tribes avoided contact from that point on.

For many years the Mountain Tribe wandered, never remaining in one area for long. Approximately fourteen years ago, however, their leader, Hamal the Chieftain, ordered the tribe to stop moving. His daughter had mysteriously disappeared, and so the tribe remained in one area, searching fruitlessly for her.

An adventurer soon discovered that she had been killed by a man impersonating The Kendal, a god of the tribe. The tribe had adapted to staying in one place so well, though, that Hamal the Chieftain decided that it was best not to move again.