From the RuneScape Wiki, the wiki for all things RuneScape
Jump to: navigation, search
The Old School RuneScape Wiki also has an article on: osrsw:Neitiznot
"Nezzy" redirects here. For the helmet, see Helm of neitiznot.

Locals will address players by their Fremennik name gained during The Fremennik Trials. Neitiznot can be accessed by talking to Maria Gunnars on Rellekka's northern-most dock.

Neitiznot is a great location for training the Crafting skill, since it has bank chests, spinning wheel, furnace, crafting shop, and yaks, which drop yak hides to tan & make yak-hide armour and hair to spin into rope using the spinning wheel.

The first few steps of The Fremennik Isles are required to get to Neitiznot. The village offers the following advantages: 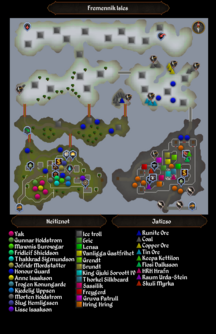 Four generations ago, a Fremennik king banished his two youngest sons, Neitiznot and Jatizso, for their often frustrating rivalry between each other. Shortly after their banishment, they stumbled upon two neighbouring islands north-west of Rellekka. Neitiznot chose the island to the west and named its community after himself. Some time later he was confronted by his brother Jatizso who demanded the island for his own. Neitiznot came out and denied his demand, and the feud continued. To this day, Neitiznot's descendants still have a fierce rivalry with the citizens of Jatizso.

Since it is in the north it snows most of the year and cold winds blow through it year round. However unlike its sister island Jatizso it has good soil for growing trees and plants. It's divided into two islands, the southern and northern island. The southern part houses the settlement of Neitiznot and the yaks. The northern one is currently infested with trolls who are fighting the Honour guard of Neitiznot. It does contain however, a large amount of arctic pine trees, and is linked to a small island to the northeast with Drakolith rocks.