From the RuneScape Wiki, the wiki for all things RuneScape
Jump to navigation Jump to search
The Old School RuneScape Wiki also has an article on: osrsw:Fremennik Province
Not to be confused with Fremennik Isles.

The Fremennik Province is a territory in Kandarin and the Lunar Sea controlled by the Fremennik. It is found in the north-eastern part of Kandarin, to the west of Troll Country. There are also islands north and west of the province, which are considered to be a part of it. This province, especially with the inclusion of its islands, bears a marked resemblance to the Baltic region. The Baltic region had a large population of Norse in the Viking Age, however the culture originates in Scandinavia.

The Fremennik Province is noted for being almost entirely ruled solely by one group of people, the Fremennik. Over the years, groups of Fremennik have left the main settlement in Rellekka and created many settlements. However, the separate tribes still interact with each other largely through trade. The exception to this is the "outerlanders", as they are called by the Fremennik. The outerlanders consist of the rest of the humans in Gielinor.

There are several other races that have made their homes in the Fremennik Province, but they are few, and their settlements are very small. The trolls, for instance, live partially in the area, and wage war against the Fremennik at every opportunity. There is also a group of intelligent penguins that have established an outpost on the iceberg north of Rellekka, as discovered in the Cold War quest. Many aquatic creatures have settled themselves in and around the province such as rock crabs and Dagannoths.

It appears that many of the non-player characters located here are a reference to many famous Vikings of Norwegian, Swedish, Scottish, and Finnish folklore.

Virtually nothing is known about the history of the province prior to the Fourth Age. The first known confirmed activity in the area was in the Second Age, when Zaros sent a party consisting of Zamorak, Viggora, Thammaron, Enakhra and Char to a Fremennik village near the coast. There, they discovered that the Fremennik had enslaved the Auspah, and their village was subsequently destroyed by Char.

At some point, V discovered the Stone of Jas on Lunar Isle, which helped him ascend to godhood, and caused the Moon Clan to discover Runecrafting and split off from the other Fremennik, settling on Lunar Isle. During the God Wars, V is known to have defended the region from the other gods, but what other else occurred during this time is unknown.

At some point, Fremennik tribes spread to neighboring islands, most notably Miscellania, Etceteria and the Fremennik Isles. All these tribes eventually transitioned to monarchy. However, not all Fremennik tribes settled, for an example, Mountain Camp tribe, although they were eventually forced to settle after Hamal the Chieftain's daughter Asleif Hamalsdotter went missing in the year 155 of the Fifth Age.

When the outerlanders discovered the Rune Essence Mine and Runecrafting at the start of the Fifth Age, another faction of Fremennik split off to wage war on the magic-using outerlanders before eventually settling in Barbarian Village in Misthalin. 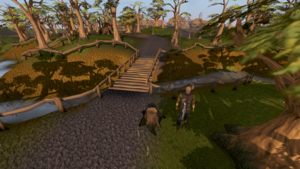 The bridge to the province.

The Fremennik Provinces's climate is known for being very harsh, probably semi-arctic. In Rellekka and the surrounding area, the wind carries in bitterly cold air from the Lunar Sea. The wind can become so strong, in fact, that the trees in the area are known to be permanently bent in one direction.

Further north, the climate becomes even colder. Snow is known to fall almost all year-round, and on some islands, such as Miscellania and Etceteria, the wind becomes so strong that the residents are forced to take shelter in the towns' castles and underground.

Even farther north are the ice-lands of Acheron. Little is known of these lands, although they are said to be so inhospitable that few can survive long there.

The Fremennik have mastered many skills, although most refuse to use magic. Their main industries include things such as fishing, hunting, and farming. They also craft beautiful longships, similar to those that Vikings built, one can be seen at Rellekka docks. Like the Fremenniks themselves, the area's industry depends largely on location.

The areas economy is largely fueled by the local resources, like fish, wood, flax and ores.

Amongst players, the Fremennik Province is fairly popular, although it is not as crowded as areas such as Misthalin and Asgarnia. The diversity of the areas resources has made it a popular area to get raw resources.

This information has been compiled as part of the update history project. Some updates may not be included - see here for how to help out!
Retrieved from ‘https://runescape.wiki/w/Fremennik_Province?oldid=35717216’
Categories:
Hidden categories: