Initially he seems quite snobbish and spoiled. When you talk to him, he will demand toys from you and is rude to the player. If you talk to him with purple sweets or a toy horsey in your inventory, he demands that you give him them. He will first demand the horsey, then the sweets, but your character will refuse to give him either.

Players doing Treasure Trails clues are sometimes directed to him with the anagram 'PIN HEIR ALL IN PLACE'.

As a child[edit | edit source]

Philipe is introduced to the adventurer as the son of Sir Ceril and Lady Henryeta Carnillean. The adventurer learns that the family butler, as a member of the Cult of Hazeel, is plotting against the life of his father, in revenge for their ancestors' prior defeat of the Zamorakian Mahjarrat Hazeel, and has the opportunity to choose to side with either the Carnillean family or the Cult of Hazeel.

If choosing to side with the Cult of Hazeel, players will poison the Carnillean household's soup. Sometime after this, Philipe gives his serving to Scruffy, the Carnillean's pet dog. As the soup was poisoned, Scruffy died after consuming the soup. After this, Philipe will act very upset about Scruffy's death, and the adventurer will say "Who would do such a thing?". Regardless, the adventurer is not suspected of poisoning their soup, even after the quest. 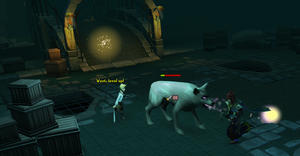 Philipe levels up while battling the Cave Wolf Matriarch

Philipe's father has decided to hire a tutor to set up a quest for Philipe in order to make him less snobbish and more brave. Initially he requests Xenia for the role, but after she refuses, Sir Ceril Carnillean then hires the adventurer, who he had hired before to help them deal with the Cult of Hazeel. By stealing his sweets and promising "new ones" as a reward, the adventurer persuades Philipe into doing the quest.

Initially bored at first (due to not being that special), Philipe gets excited when an unexpectedly large wolf appears, which the adventurer had not placed in the quest; rather, Xenia had found the wolf, and stunned it under a pile of rubble. With the help of the adventurer, Philipe defeats the wolf and frees the girl pretending to be the damsel in distress, the "boring, dull and cootie-filled" girl Sarsaparilla, enjoying the thrill of adventuring. The experience shaped Philipe into a mature nobleman, and he decided to set out on adventures of his own to learn more about the outside world.

Adventures of his own[edit | edit source]

After the Carnillean Rising quest, Philipe will travel the world on his own adventures, and if you speak to him he will give you his experience lamps. You can speak to Ceril Carnillean to find out more about Philipe's current location.

Rover the red dragon is a baby wolf with a red dragon head stuck on her head. She is given to the player by Henryeta Carnillean if they have at least 200 quest points and have claimed the first 4 lamps Philipe Carnillean has to offer after completing Carnillean Rising.

Claiming the first 7 lamps after the player has at least 350 quest points completes the Keeping Up with the Carnilleans achievement.

Spot the black dragon is a baby wolf that Henryeta Carnillean will give to the player if they have at least 400 quest points and have claimed the first 8 lamps Philipe Carnillean has to offer after completing Carnillean Rising. It was added to the game on 16 January 2017, but was only first obtainable on 19 November 2018, after the release of The Needle Skips.

The list of locations is the same for every player; however, you need a certain number of quest points for him to appear. Ceril will say that he doesn't know where he is if you don't have the sufficient amount of quest points to receive the next reward. You will have to use the lamp before Philipe will appear at the next location. These are the locations he can be found at in order:

Concept art of Philippe and Sarsaparilla