From the RuneScape Wiki, the wiki for all things RuneScape
Jump to: navigation, search
The Old School RuneScape Wiki also has an article on: osrsw:Acheron
Not to be confused with Archon.
This article is about the land. For the mammoth, see Acheron mammoth. 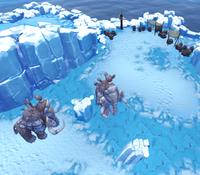 The Mammoth iceberg, an iceberg that broke off Acheron and drifted into the Lunar Sea.

Acheron (pronounced ASH-uh-ron) is a frozen continent[1] located north of the Fremennik Province. It has a reputation for being both incredibly cold and hazardous. According to Chieftain Brundt, one would need a sturdy and agile body simply to stay alive.[2] Fremennik stories claim the continent is home to malicious winds that are cold enough to freeze hearts to stone,[3] and the crew of the Lady Zay jokingly claim that it is cold enough to freeze the words coming out of one's mouth.[4]

The Fremennik claim that Acheron is home to things which "live where no living thing should survive".[3] So far, the only known inhabitants are intelligent animals. Among these are the Acheron mammoths, who pride themselves on being great warriors. They claim to act as peacekeepers between the continent's infighting factions.[1] A group of these mammoths can be found on the Mammoth iceberg, which broke away from the continent and floated south. The Penguins also hail from Acheron, their "Motherland" being a region on the continent.[5] Within the Motherland is the city of Palingrad, and they are also believed to have a secret base elsewhere on Acheron.[6]

The Fremennik plan to lead an expedition to the continent, once they have dealt with the Dagannoth.[3]