From the RuneScape Wiki, the wiki for all things RuneScape
Jump to navigation Jump to search
The Old School RuneScape Wiki also has an article on: osrsw:Jatizso

Jatizso (pronounced "Yah-tizz-so"[1]) is one of the islands which make up the Fremennik Isles. It is ruled over by King Gjuki Sorvott IV, aided by his chancellor, Thorkel Silkbeard. Jatizso is a dull, grey island, whose population is heavily taxed and seems generally unhappy.

Locals will address players by their Fremennik name gained during The Fremennik Trials.

Four generations ago, a Fremennik king banished his two youngest sons, Neitiznot and Jatizso, for their often frustrating rivalry between each other. Shortly after their banishment, they stumbled upon two neighbouring islands north-west of Rellekka. Jatizso chose the island to the east and named its community after himself. To this day, Jatizso's descendants still have a fierce rivalry with the citizens of Neitiznot.

The only way of getting to Jatizso itself is by boat from the north-eastern most Rellekka dock. Players must have started The Fremennik Isles quest to travel to the island. Jatizso can be walked to from its sister island, Neitiznot. However, due to the dangerous ice trolls in the north, it is safer and faster to take the boat to the mainland and then back again. Methods of transport include:

Jatizso's economy revolves around Mining, Smithing, Fishing and Cooking as its local resources are mainly ores and fish. The island has a number of resources and facilities useful to players.

The dock is the first place players arrive upon visiting the Fremennik Isles. Mord Gunnars is here to which players may speak to and head back to Rellekka on the Fremennik boat. There are also a few cage/harpoon and net/harpoon fishing spots that are relatively close to a bank. 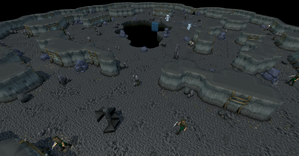 There are mines below the city which contain many adamant, mithril, tin and coal ore rocks.

A small obelisk for recharging Summoning points is located at the city gates to the south. 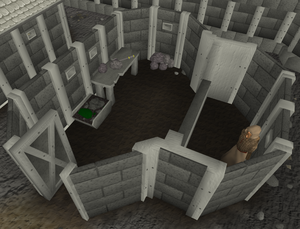 The Bank of RuneScape is right near the southern city gates. Unlike most other banks, it contains no booths, bank tables or chests for bankers to store items in. The only banker is named Magnus Gram. There is an ore table and crate in the bank, suggesting ore examining, studying and working is done in the bank. The bank was not required to pay the King's window tax during The Fremennik Isles.

There are two anvils in two different buildings, just near the city's western gates. It is fairly close to a bank. 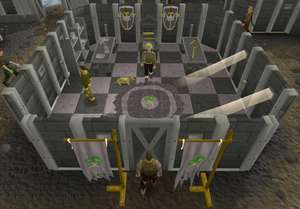 Jatizso Hall is the current location of King Gjuki Sorvott IV. The player visits the hall constantly during The Fremennik Isles quest. It contains elaborate tiled flooring with the Jatizso crest, and a large throne for the king. There is also a chest behind the King's throne where the player receives the jester costume during The Fremennik Isles quest.

Just north of the bank is a small building with a locked door. As of yet, it has no purpose. It contains a bed, shelf and table with a bright beam of light shining through the window. It may be set aside for a future quest or event. Oddly enough, during The Fremennik Isles, the King did not ask to have this building taxed for having a total of 6 windows, adding up to a total of 6000 coins. 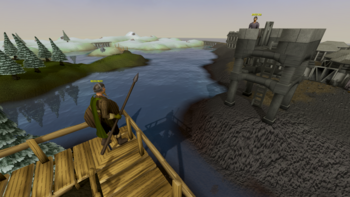 The guards constantly yell at each other

In the westernmost tip of the island is the stone guard tower. A guard stands on duty and yells insults at the guard tower in the opposite island. When asked what he is doing, the guard explains he has been ordered by the King to shout insults at Neitiznot. The player has the option to Watch-shouting which is a Fremennik Province task.

Keepa Kettilon's Store is a seafood store located in north-eastern Jatizso. It shares a building with Flosi's Fishmongers. The shop-owner is Keepa Kettilon. The store only sells cooked fish, but Flosi's sells the raw versions. The store lists most of the popular fish, but only stocks 10 cooked cod and 10 cooked salmon; the rest of the fish need to be sold by players to the store first.

Flosi's Fishmongers is a fish store located in north-eastern Jatizso. It shares a building with Keepa Kettilon's Store. The shop-owner is Flosi Dalksson. The store only sells raw fish, but Keepa's sells the cooked versions. The store lists most of the popular fish, but only stocks 10 raw cod and 10 raw salmon; the rest of the fish need to be sold by players to the store first.

Contraband Yak Produce is a yak goods store located directly north of Jatizso Hall (building with chequered floor). There is no minimap icon. It can only be accessed by paying the shop owner's taxes for her during or after The Fremennik Isles quest. The store is illegal, but the owner opens it to the players who help her, as a sign of thanks. It is located in the food hall restaurant.

Weapons Galore is a weapons store located in south-west Jatizso. The shop-owner is Skuli Myrka. The store specialises in mithril weaponry only, stocking 10 of each of the melee weapons.

Armour Shop is an armour store located in south-west Jatizso. It shares a building with the Ore Store. The shop-owner is Raum Urda-Stein. The store specialises in Mithril armour only, stocking 10 of each item.

Ore Store is an ore speciality store located in south-west Jatizso. It shares a building with the Armour Shop. The shop-owner is Hring Hring. The store stocks tin and copper ore, but iron, silver, coal, gold, mithril and adamantite ores are all defaulted at 0 stock; therefore, other players must sell these ores to the shop, first. The shop carries all ores with the exception of runite ore, clay, and non-tradeable quest related ores. All ores in the store seem to sell lower than their normal Grand Exchange price.