From the RuneScape Wiki, the wiki for all things RuneScape
Jump to: navigation, search
The Old School RuneScape Wiki also has an article on: osrsw:White pearl
Not to be confused with White tree fruit.
White pearl? (edit)

The white pearl can be obtained by picking Thorny bushes located on top of White Wolf Mountain, next to a gnome glider.

The White pearl can be eaten, healing 200 life points, and when eaten, a message will say "You eat the White Pearl and spit out the seed when you're done. Mmm, tasty.". The remnants of the fruit will become a White pearl seed. The White pearl seed is needed during the Mountain Daughter quest.

In order to pick the White pearl, the player must be equipped with a set of gloves, excluding these: 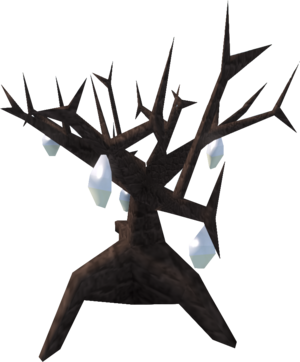 The bush with the White pearl.

After the quest this may no longer be picked.

Alternatively, you pick a fruit and eat it, in order to obtain the seed. Then, drop the seed and pick another fruit. You will be able to pick up the seed that you initially dropped (providing you do not eat the newly picked fruit). You may then bank the fruit. And, complete the quest with the seed. This leaves the player post-quest-completion with a single uneaten White Pearl in their possession.

A White Pearl flower was found with Kara-Meir in Betrayal at Falador.