The Following is the mourners' account of the plague:

According to the mourners, the plague was brought to the West Ardougne by the city's ruler, King Tyras. Following one of King Tyras's ventures into Tirannwn, he returned to the city, bringing with him the disease. 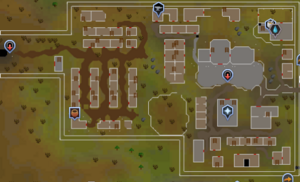 West Ardougne as it is today, ravaged by disease and neglect.

Because of this, the people of Ardougne are strongly against King Tyras, but due to the city's quarantine and the king's continued absence, little can be done to remove him from power.

The disease first appears mild, with symptoms similar to that of the common flu. However, within a few days, the disease worsens greatly, causing the victim to suffer from nightmares and horrible hallucinations. These alone force many victims to madness.

Soon after, the victim's blood thickens until it becomes a black, tar-like substance. This ultimately leaves the victim brain-dead, their skin cold to the touch. However, their body still acts mindlessly, spreading the disease to others.

Within two weeks, the victim is dead. To prevent their bodies from contaminating others, they are cremated and disposed of in an unknown location.

The mourners came to West Ardougne following the city's quarantine, equipped with gear that, in theory, protects them from contamination. The mourners' goal is to prevent the disease from spreading to the outside world through a variety of means. This includes keeping residents within the city's walls at all times.

When a victim falls ill, the mourners take them to a hidden location where they can be treated. However, in virtually all cases, this proves futile, and the victim ultimately dies due to the disease or to merciful euthanisation.

As even the cremated ashes of the diseased could pose a threat, only the mourners may attend their funerals. This has earned them their name.

The mourners's account of the plague is almost entirely inaccurate.

The mourners have been poisoning the city's food supply using a common mold found in rotten food such as apples. When the poisoned food (usually grain) is consumed, the victim is infected with a minor flu-like disease. At this point, they are taken to a hidden location.

In reality, the disease is minor, causing only temporary flu-like symptoms. Once taken away, the patient is healed within a number of days.

The mourners are elves of the Iorwerth Clan, the clan that betrayed the elves of Prifddinas in the Fourth Age. With support from King Lathas, the mourners have purposely fabricated the entire story.

The mourners have been infecting the city's food supply and dyeing sheep to make them appear sick. When victims are taken from their homes, they are transported to a large tunnel system beneath the mountain range that separates Tirannwn from Kandarin. Here they are forced to dig as the mourners, known secretly as members of the Prifddinas Death Guard, search for the Temple of Light, a temple said to hold untold power. Most die either at the hands of dark beasts or from being overworked.

King Lathas wishes to use the mourners to reclaim Camelot, which his father, King Ulthas, gave to King Arthur following his arrival in Gielinor. In reality, however, the mourners are using King Lathas simply as a tool to search for the Temple.

During Plague's End the player reveals the plague was fake. This caused the citizens of West Ardougne, led by the player, to revolt against the Mourners and they take over their headquarters.