Making History is a quest about the restoration of the outpost north of West Ardougne and preventing it from being destroyed. During the quest, major parts of Kandarin's history and that of the Ardignas bloodline are revealed.

Save the outpost[edit | edit source]

To begin, speak with Jorral at the outpost located south of the Tree Gnome Stronghold, and north-west of West Ardougne. He is distraught that the outpost will soon be razed to make way for King Lathas' alchemists' lab. He shows you the outpost's "great" history through a rather humorous cutscene, and requests you to help him save the building by providing the King with the building's history and convince him to reverse his decision.

In order to save the outpost, you must gather information from various sources: Erin the silver merchant, Droalak the ghost, and Dron the warrior. This can be done in any order. 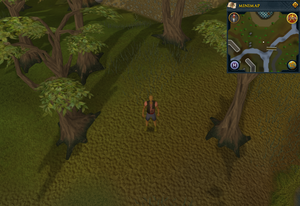 The location of the chest

Erin's great-grandfather was stationed at the outpost, according to Jorral's records, and he thinks it might be useful to speak to Erin about it. The silver merchant can be found at his silver stall in East Ardougne. If you haven't already got a spade, buy one from Richard's Farming Shop, located north of the Ardougne lodestone, before heading to Erin. Erin won't talk to you if you've recently stolen from his stall or have a vial of stench in your inventory.

Speak to Erin and inform him about the potential fate of the outpost. He will instantly come up in arms, claiming that the construction of an alchemists' lab will only cause chaos. Although even his mother doesn't know about his great-grandfather too well, he provides you with his only heirloom - an enchanted key - that you may use to learn about the outpost's history.

The enchanted key reacts to a buried chest, and the closer to the chest you are, the warmer the key. The key's states go from frozen, to cold, to warm, to very hot, to burning hot, and finally to steaming hot when standing directly on top of the chest. The chest is located between the observatory and the Castle Wars lobby, directly south of the observatory and before the bridge. You must dig it up using either a spade or meerkats.

Use the enchanted key to unlock the chest, which contains a journal about a Zamorakian named Drozal, who took up residence in the outpost with 8 other followers and created trouble for the people of Ardougne.

Additional treasure from the enchanted key can only be obtained after the quest has been completed.

Droalak, according to Jorral, died at the outpost and might be able to provide valuable information about the outpost. He can be found wandering near the Port Phasmatys general store in the south-west part of the city.

Equip your ghostspeak amulet, enter Port Phasmatys and speak to Droalak. Droalak tells you that he holds a scroll describing the timelines of the outpost, but he first wants your help in reconciling his wife, Melina. He had gone against his wife's wishes, and left to go to the outpost, and she refuses to forgive him for not returning to her. In order to earn her forgiveness, he requests you to present her with a strung sapphire amulet, as that was the last gift he had given her.

Melina, also dead and now a ghost, can be found in the building just east of the general store. She is elated by Droalak's gift and agrees to forgive him, before passing on from the world. Go back and deliver the message to Droalak, who hands over the scroll as a token of gratitude, and requests to inform him if the scroll was of any use.

Dron isn't directly related to the outpost, but Jorral figures that it might be fruitful to talk to him since he has studied about various wars, and the outpost must be bound to have been involved in one of them. Dron can be found in Rellekka, north-east of the market and near the musician. He has no time for "weaklings" though, and says to speak to his brother, Blanin.

Blanin is in the south-eastern part of the town, just north of the house with the dairy churn. He tells you that his brother is an introvert and only speaks to those who know him well enough. Since you have a noble intention, he provides you with information about Dron - on the condition that he must not know that you spoke with his brother.

Go to Dron and tell him that you're after some important answers. When he asks how you know him, respond that it is because he is "the famous warrior Dron." He is suspicious and creates a test to figure out how much you really know about him. The order and wording of his questions may vary for each player, but the correct answers are:

When satisfied, he reminisces reading about a battle between a couple old friends, who were separated on their beliefs; one followed Zamorak, while the other favoured Saradomin. The battle culminated with both of them clashing swords atop the outpost, where they eventually woke up to the gravity of the situation and realised the error of their ways. Shortly after, they re-united and converted to Guthix followers.

Bring back all the information to Jorral, who will be ecstatic about the discoveries and promptly proceed to summarise them into a letter to be delivered to King Lathas, providing him with the suggestion of converting the outpost into a museum instead.

King Lathas can be found in his bedroom on the 1st floor[UK]2nd floor[US] of the East Ardougne castle. He is surprised to learn about the outpost's rich history and writes a reply letter, in which he promises to build the outpost into a museum. The letter must then be delivered to Jorral, who will be glad that the outpost has been saved. 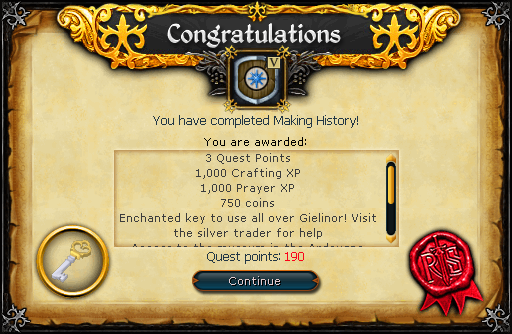 Making History is directly required for the following quests/miniquests: