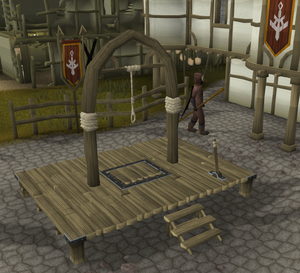 The gallows in Ardougne, placed there by Narras.

'Mad' King Narras Ardignas was the second king of Kandarin. He died some years ago, before the rule of King Ulthas. He is the earliest known named king in the Ardignas bloodline.

Narras is said to have been insane, and invented the game of Hangman to encourage literacy amongst his subjects. His idea of hangman, however, involved hanging actual people in the gallows. While one person guessed the word, the one in the gallows would come increasingly closer to death. If the word was not guessed in time, the victim would be hanged and killed.[1] His gallows can still be found in front of the Civic Office of West Ardougne today.[2]

It is unknown when he died, but he was succeeded by his son Ulthas.