From the RuneScape Wiki, the wiki for all things RuneScape
Jump to: navigation, search
The Old School RuneScape Wiki also has an article on: osrsw:Evil creature 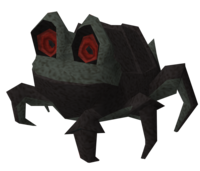 Evil creatures are monsters featured only during The Eyes of Glouphrie and The Path of Glouphrie quests. They are spies sent by Glouphrie, first appearing as cute creatures, kept as pets by the gnome population. During the quests, their true form is revealed.

Their combat level is not shown. However, they are attackable and hence they only have 1 life point, they are tied with Chinchompas and carnivorous chinchompas as the monsters with the lowest life points in the game.

During The Eyes of Glouphrie quest, all the evil creatures in the Grand Tree are killed.

One will remain at Tree Gnome Village until The Path of Glouphrie, where upon it too is killed during the quest.

It is possible to not kill the evil creature in one hit. As a result it will attack you back with an invisible ranged attack that may hit your character from a distance, however it is counted as melee damage if a player takes damage from them.