From the RuneScape Wiki, the wiki for all things RuneScape
Jump to navigation Jump to search
Bolrie? (edit)The Prisoner of Glouphrie? (edit) 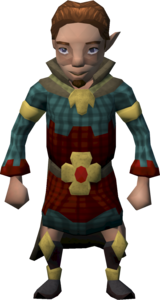 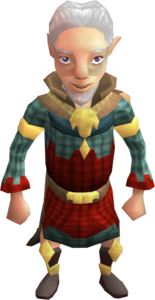 Bolrie is a legendary gnome seen in a cutscene during The Path of Glouphrie and central to the plot of The Prisoner of Glouphrie, in which the player and his daughter rescue him from Arposandra. His descendant is Golrie. He is particularly interested in elven artefacts and magic.

Bolrie once led the gnomes of the Tree Gnome Village late in the Fourth Age. Bolrie also waged war on the humans led by General Khazard, under the pretence that they were preparing to attack, seeing that Healthorg and Argenthorg would not do anything to deal with the supposed "threat".

Upon the death of King Healthorg, Bolrie campaigned to be the new king of the Tree Gnome Stronghold against Healthorg's son, Argenthorg. During the campaign, Bolrie's advisor had illusions of human food placed on Argenthorg's dinner table. Bolrie then confronted Argenthorg, claiming that he preferred humans over gnomes and was trying to discredit him. Argenthorg panicked and ordered Yewnock to activate his illusion-detecting machine, which revealed Bolrie's advisor to be Glouphrie.

Once Glouphrie was revealed, Bolrie was accused of being his accomplice and put to shame. Bolrie stood down as candidate and left the Gnome lands, his family being banished to a cave underneath the Tree Gnome Village.

Determined to exact revenge upon Glouphrie, he went west in search of Arposandra. He was injured in the mountains, but the elves of Lletya rescued him and gave him a cave to live and study in. For years, he experimented with devices to dispel illusions in hopes of discovering the hidden entrance to Arposandra, which he did, but was caught and held prisoner there.

The following takes place during The Prisoner of Glouphrie.

Bolrie was away for almost two hundred years. He lived in Lletya for many years studying illusions, crystals, and light colours before being taken prisoner in Arposandra.

After discovering a long lost letter from him to his wife, Gena, the adventurer and Bolrie's daughter Golrana journey west, and using his designs, built a device to reveal Arposandra's location and rescue him. Bolrie initially believed the adventurer to be Glouck disguised as a human, but the adventurer was able to convince him that they were the real deal, either by correctly answering most of his questions, or performing an embarrassing dance.

The three were able to escape before the guards could capture them, sealing off their point of entry with a massive boulder. Bolrie soon learned from Golrana that Gena had passed away, saddened that he was not there for her on her deathbed. He also learned that Bolren supported his cause and soon let his family live on the surface, Golrana was married to Belmondo, and she had a son named Golrie who was much like him. Golrana then used some grand seed pods to call for rescue, with Belmondo answering the request. Belmondo soon brought the three to the Tree Gnome Village, where he reunited with Bolren and met his grandson for the first time.

Currently, Bolrie is recuperating, intending to return to Arposandra to get revenge on Glouphrie when the time was right, apologising to the adventurer for not trusting them at the start, but tells them that he will need their help when he plans to return.

Transcripts Bolrie is the author or co-author of:

This information has been compiled as part of the update history project. Some updates may not be included - see here for how to help out!
Retrieved from ‘https://runescape.wiki/w/Bolrie?oldid=35722170’
Categories:
Hidden categories: