From the RuneScape Wiki, the wiki for all things RuneScape
Jump to: navigation, search
For the music track, see Bolrie's Diary (music track).
Lectern? (edit) 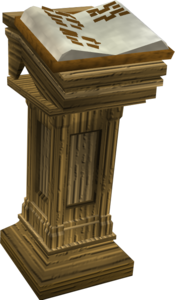 A lectern is present in Yewnock's machine room in the Gnome Village Dungeon, accessed during The Path of Glouphrie quest. It holds Bolrie's diary, which has 3 chapters that lead to cutscenes. There is another diary in Bolrie's lab in Lletya, containing two chapters. Reading any of the chapters starts a cutscene and unlocks the Bolrie's Diary music track.

The following text is transcluded from Transcript:Bolrie's Diary.
The Path of Glouphrie
Chapter 1. Bad advice

In which Bolrie is advised by a mysterious stranger, and ambition is fed.

In which the great king dies and the search for a new one begins.

In which a secret is revealed, an old foe reappears and ambitions end.

Finally, I understand my failinings and my true enemies. I dedicate the rest of my shattered life to the task of eradicating them both.

Now that I have found a new home, it is time for me to start my research. I will probably take me years, decades, maybe even centuries... The toil it will take does not matter. I will make a device that will bring Glouphrie to his knees.

In which Bolrie arrives in Lletya and meets the locals.