From the RuneScape Wiki, the wiki for all things RuneScape
(Redirected from Glouphrie)
Jump to navigation Jump to search
The Old School RuneScape Wiki also has an article on: osrsw:Glouphrie the Untrusted
Not to be confused with Glough.
Loading...
GlouphrieAdvisor

Glouphrie the Untrusted was once one of the greatest gnome wizards of the Fourth Age, specialising in illusions. Although he was a close associate of King Healthorg's and saved the tree gnomes from catastrophe at the Battle of Atarisundri, he fell from grace when it was found out he had magically covered up the murder of the spirit tree Argento. Exiled from the Grand Tree, he left to found the gnomish city of Arposandra. Years later, he returned in disguise and manipulated one of the candidates to succeed the late Healthorg, Bolrie, but this plot was eventually thwarted and he returned to Arposandra. 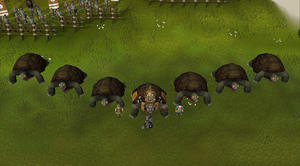 During the reign of King Healthorg, a large area of land south of the Gnome Stronghold was to be claimed by the gnomes. A large tribe of goblins also sought to claim the land, and the two soon met in combat. Using his unique brand of magic and taking advantage of the goblins’ simplemindedness, he was able to fool the Goblin army into believing that the Gnome army had several battle tortoises which sent the Goblins into a panic, giving the vastly outnumbered Gnomes an easy victory, and securing his place as one of King Healthorgs advisors, along with Hazelmere and Oaknock the engineer. 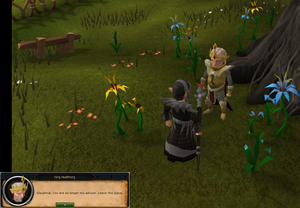 Whilst many Gnomes were grateful for Glouphrie's part in the Gnomish victory, Oaknock was still distrustful of him. During the 4th age, there was a silver spirit tree in the Gnome Stronghold called Argento, who had been befriended by Hazelmere. One day however, Hazelmere noticed that the usually friendly Argento was silent, and his aura had vanished. Hazelmere then went to Oaknock, and together they constructed a machine that would render illusion magic ineffective. Once activated, the machine revealed that Argento had been murdered. As the only one with enough strength to keep the illusion for so long, it became apparent that Glouphrie had hidden the destruction of Argento. Glouphrie was then banished from the Gnome Stronghold by King Healthorg, and so began the Gnomes' distrust of all magic users.

After Healthorg's death Glouphrie disguised himself and became advisor of Bolrie, king of the Tree Gnome Village. During his time as advisor Glouphrie convinced Bolrie that Healthorg's son, Argenthorg, would not be suitable to lead the Gnome Stronghold. Bolrie agrees with this and runs in an election versus Argenthorg. As part of the election campaign, Bolrie confronted Argenthorg over his policies with humans in an attempt to make the gnome people turn against him. Glouphrie (without his knowledge) aided Bolrie by creating illusions that discredited Argenthorg. This subterfuge is eventually revealed by Yewnock's anti-illusion device, and Bolrie stands down from the election in shame. Yewnock's anti-illusion device also shows Bolrie that his advisor had been Glouphrie all along. Glouphrie fled after this attempt to gain control of the Gnome Stronghold and would not be mentioned again for several years. Bolrie became an exile, and also disappears from the Gnome Lands.

Recently, the Gnome Stronghold was filled with several Cute Creatures, which according to King Narnode Shareen had simply appeared one day, and as such many Gnomes had kept them as pets. However, after the re-activation of the anti-illusion machine, it was discovered that these were actually Evil creatures with an illusion spell cast upon them. According to Brimstail, the function of these creatures was to act as eyes for their masters, which was supported by their tactical positioning in the stronghold. Due to the nature of their disguise, it is strongly implied to be either Glouphrie or one of his descendants who performed the spell. Whilst his current location is unknown, it is hinted that he was the founder of the hidden city of Arposandra.

Glouphrie has also sent ambassadors to the dwarven capital city of Keldagrim. Originally disguised as ambassadors from the Grand Tree, they soon created an alliance between Arposandra and The Red Axe. With the aid of Hreidmar, the company's director, they managed to create an army of chaos dwarves. How Glouphrie and the rest of the city will benefit from this is unknown. However, their plot was ultimately foiled by the Adventurer who used the trolls to intercept the Chaos Dwarf army.

However, in recent times, Glouphrie's name is forbidden in Arposandra by Glouck, though what caused the incident remains unknown.

Transcripts Glouphrie the Untrusted speaks in:

This information has been compiled as part of the update history project. Some updates may not be included - see here for how to help out!
Retrieved from ‘https://runescape.wiki/w/Glouphrie_the_Untrusted?oldid=35936799’
Categories:
Hidden categories: