From the RuneScape Wiki, the wiki for all things RuneScape
Jump to navigation Jump to search
This article is about the unique rune obtained during Glorious Memories. For the runes used in Lunar spells, see Astral rune.
Item JSON: {"edible":"no","disassembly":"no","stackable":"no","stacksinbank":"yes","death":"always","name":"Unfinished astral rune","bankable":"yes","gemw":false,"equipable":"no","members":"yes","id":"14697","release_date":"1 April 2009","restriction":"quest","release_update_post":"Glorious Memories","lendable":"no","destroy":"'''During Glorious Memories'''<br>If you throw this away, you will need to look in the icy cave where you found it. <br>\n'''After Glorious Memories'''<br>If you need the rune again, speak to Chieftain Brundt of Rellekka.","highalch":1,"weight":0.002,"tradeable":"no","examine":"It definitely doesn't belong to any of the adventurers you know about.","noteable":"no"}

The unfinished astral rune is obtained as a Glorious Memories quest reward from Nial Swiftfling. The player picks it up after defeating Nial Swiftling. After the quest, the player can bring it to Baba Yaga to receive the Prophecy Tablet and an antique lamp which gives 2,500 experience in any skill above 35. Between the dates of 2 March 2010 and 11 October 2010 after handing the rune to Baba Yaga, she would perform the Blow Kiss emote. After she did the emote the player would have to talk to again like she had never received it. If you happen to lose the unfinished astral rune before giving it to Baba Yaga, you can talk to Chieftain Brundt about Glorious Memories to get it back (option 3. Ask about the birthday feast). 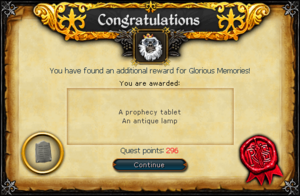 This information has been compiled as part of the update history project. Some updates may not be included - see here for how to help out!
Retrieved from ‘https://runescape.wiki/w/Unfinished_astral_rune?oldid=35649600’
Categories:
Hidden category: