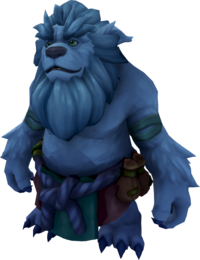 The yeti species as a whole can be found in cold, snowy areas, including the Rellekka Hunter area dungeon and the Land of Snow. Young yetis are also a prominent part of the yeti species, with many yeti children cared for in yeti society. 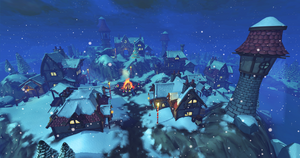 Unintelligent yetis were first discovered when helping Explorer Jack search for treasure in the Land of Snow, said treasure turning out to be yeti dung. Yeti dung is said to have a 'horrendous smell', according to snow imps Marvin and Marius. Not much is known about this uncivilised breed of yeti; however, they appear to enjoy living in icy caves and display aggression to humans.

Some unintelligent yetis existed formerly as humans. These humans were turned into yetis as a result of being spit on with Gnoeals magic-based green goo. Both Nial Swiftfling and King Vargas were turned into yetis this way; however, King Vargas managed to be cured with Yeti curse cure as he was not hit with the brunt of the attack (unlike Nial, who succumbed to the yeti curse). If a human is only hit with a small amount of Gnoeals spit, the curse to a full yeti transformation can be staved off for multiple years.

Intelligent yetis were first discovered upon helping the 'yeti child', Violet, to get back to her adoptive yeti parents. Such yetis exist in an intelligent, civilised society, including living in houses, and wearing clothes despite not needing them to stay warm due to their biology. These yetis are not aggressive to humans and instead enjoy eating food such as stew, 'pickled pink pancakes', and maple syrup. Yetis also seem to enjoy ice cream, as shown by yeti children Scoop and Merry and snowcones sold by the Snowcone seller.

Peggy, a yeti in Yeti Town, states that the town is one of the oldest yeti settlements. The current settlers of Yeti Town were previously nomadic and settled in the town after its previous inhabitants (claimed to be humans) disappeared.

Yetis gather every year in Yeti Town for a festival, which is considered to be a rite of passage.[1] The festival celebrates the wonders of yeti life.