From the RuneScape Wiki, the wiki for all things RuneScape
Jump to navigation Jump to search
The RuneScape Classic Wiki also has an article on: classicrsw:Carpentry 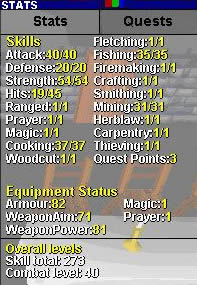 A picture of the RuneScape Classic stats interface, showing the Carpentry skill.

Carpentry was a skill that was in the stats interface of RuneScape Classic for much of its early life, though there was no way to train it. It wasn't until the Agility skill was implemented that Carpentry was removed to be resurrected later as the much more comprehensive Construction skill.

Originally the empty houses and large building on the east side of Falador were set to be the player-owned houses along with an added and then removed part of Varrock. When Falador's graphics were updated on RuneScape 2, Falador's player-owned house area simply became an NPC residential area.

This information has been compiled as part of the update history project. Some updates may not be included - see here for how to help out!
Retrieved from ‘https://runescape.wiki/w/Carpentry?oldid=35680870’
Categories:
Hidden category: