From the RuneScape Wiki, the wiki for all things RuneScape
Jump to: navigation, search
The Old School RuneScape Wiki also has an article on: osrsw:Total level 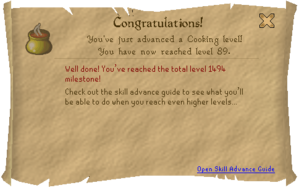 Total level is the sum of the levels of all of a player's Skills. The current maximum for members is 2,898, and the maximum for free players is 1,770. Total level is a common way for players to compare their stats. The minimum experience to achieve a total level of 2,898 is 784,468,804.

The opening page on the Hiscores ranks players by their total level, then by experience. Other than when new skills have been recently released, the top ranked players in the hiscores are generally listed in order of experience rather than rank. The number one player won't have a higher level than the number two player, but will have more experience. The current minimum requirement to be ranked (at rank 2,000,000) on the hiscores for Overall is level 45.

After the updates on 21 May 2008, players would be informed when their total levels reached important milestones. Free players who used to be members would still receive a message stating that they've reached the highest total level possible on free-to-play worlds when they reached a total level of 1614. When players receive this message there is also a short animation with 6 large fireworks shooting out from the player.

This information has been compiled as part of the update history project. Some updates may not be included - see here for how to help out!
Retrieved from ‘https://runescape.wiki/w/Total_level?oldid=35569077’
Category:
Hidden categories: