From the RuneScape Wiki, the wiki for all things RuneScape
Jump to navigation Jump to search
This article is about the Hitpoints skill prior to the major update on 3 March 2010. For the current version of the skill, see Constitution.

Hitpoints (also known as HP or health) was a skill representing the amount of damage a player or monster can withstand until they die. This is known as death, which happens when their hitpoints reaches zero.

On 3 March 2010, the Hitpoints skill received a major update, renaming it Constitution.

The number of hitpoints a monster had varied between 1 and 2,000. The Corporeal beast, the highest level monster at that time in RuneScape, topped the list, followed by Nomad, Turkey (2009 Thanksgiving event), Decaying avatar, Living rock patriarch, Tormented Demon, Living rock striker, Kree'arra, Commander Zilyana, General Graardor, K'ril Tsutsaroth, and the Kalphite Queen (although the Kalphite Queen has two forms, each of which has 255 hitpoints, effectively giving her 510 total hitpoints).

The highest amount of hitpoints of a monster in an activity was 1,000; the avatars of Soul Wars. TzTok-Jad was second at 250 hitpoints.

The highest amount of hitpoints for a familiar is the Steel Titan with 750 hitpoints.

The title of monster with the least amount of hitpoints is a tie among the Carnivorous chinchompa, the Chinchompa, evil creatures, and Miscellanian citizens and guards, all with 1 hitpoint each. This effectively meant that any successful attack would have killed them in one hit. 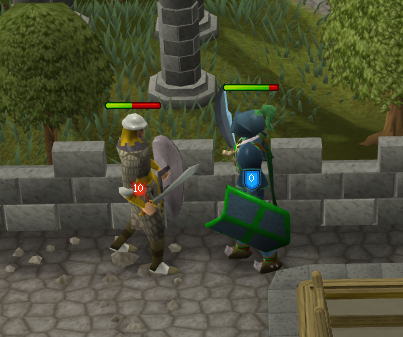 Hitpoints bars appear above players' and attackable NPCs' heads when in combat.

Some players coming to RuneScape 2 from RuneScape Classic had only 9 hitpoints instead of 10.

While fighting, both the opponent and the player will have a bar on top of them. This bar represents their HP. 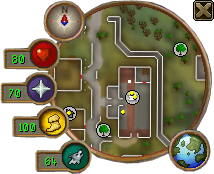 Current HP can be seen in the circle just beneath the compass, and is labelled by a heart.

If a player had only 5 HP left, assuming that they had 30+ maximum HP, then the bar on top of them would be mostly red, meaning they are near death. However, due to an update (most likely a hidden update of an unknown date), the health bar above your head will no longer change shades. This may be due to complaints on the forums.

Now, players can just look over to the top-right of their RuneScape screen and check how many hitpoints they currently have remaining and can be alerted when their hitpoints drop to 25% or lower; during then, the Heart Icon will start to pulse. And due to a recent hidden update, players are now further warned that their hitpoints are getting low (25% of total HP) through the addition of a beating heart sound effect which accompanies the pulsing animation until health is restored above 25%. (Note that this is a very common device in video games, almost always used to show that the player is near death or that another similarly dramatic event is occurring.)

Players can cure the poison early with an antipoison potion that members can make with the Herblore skill.

Also note that damage caused by poison gives no experience to any skill.

If a player is in Pest Control, in a player-owned house, duelling another player at the Duel Arena, or playing any other safe activity, they will not lose any items on death, and will respawn in a designated location with all items retained.

A ring of life can also teleport the player safely back to the chosen respawn point automatically upon reaching 10% or below their maximum HP. There are three exceptions, either the player was hit for more than 10%, they are beyond level 30 in the deep wilderness or they are in a safe mini-game with no danger of losing one's items. A ring of life can only be used one time before disintegrating.

In addition, if a player has used the Abyss for runecrafting, they are given a skull that appears over their head. If a player dies of any circumstances while being "skulled" they lose ALL of their items carried at the time, rather than the usual keeping three. However, if a skulled player dies while the "Protect Item" Prayer is on, they keep ONE item (one more than the usual, which is zero if the player is skulled). If a player does not enter the Abyss within twenty minutes of receiving the skull, the skull vanishes.

When a player dies, they will respawn, meaning they will live again. The player will keep 3 of their items (if not skulled). 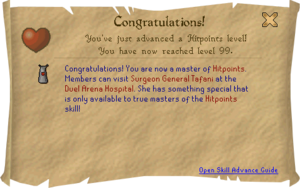 The message a player would receive after obtaining 99 Hitpoints

To earn experience in Hitpoints, a player has to fight or do a quest that rewards Hitpoints experience. Alternatively, one could use an item that gives a specific amount of experience (ex: genie lamp).

When a player deals damage to an opponent, they receive some Hitpoints experience. If a player hits the opponent, whatever damage they deal would be multiplied by 1.33 and given to the player's Hitpoints. This is one of the slowest skills to gain levels on, with experience being earned at one-third the rate of Attack, Ranged, Strength or Defence.

The quickest way to earn Hitpoints experience is the Soul Wars activity. Amazingly, a player achieved 99 Hitpoints at a low combat of 25, thus being the lowest level possible with a Hitpoints cape.

A player can heal to restore their HP back to its maximum. There were a number of ways to do this:

A player wearing a Hitpoints cape (t) and performing the Skillcape emote.