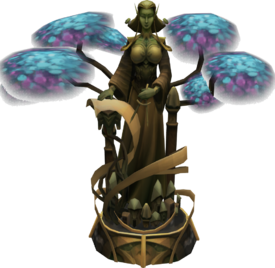 The Ithell statue is the statue designed by the former Lady Ithell. One copy of it is made in Lletya during Plague's End by the player. Another copy stands at the Harmonium in Prifddinas at the south-western corner of the Ithell Clan district and one near Lady Ithell at the eastern side of the clan district. 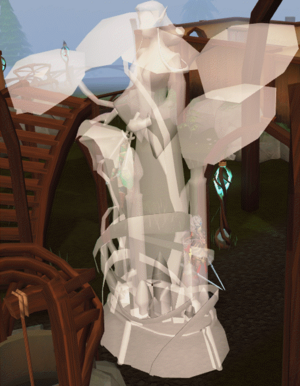 During the quest the player collects the five symbols that are carved into the buildings of Lletya and discovers that the symbols are actually statue plans. Using 10 Magic logs at the Statue hotspot in Lletya completes the Ithell Statue. This lets Kelyn realise that she is the new Lady Ithell by looking at the statue. After the quest, when Prifddinas is regrown, copies of the statue are located in the Ithell Clan district in Prifddinas, one inside the Harmonium (south west corner of district) and one near Lady Ithell (eastern part of the district).

This information has been compiled as part of the update history project. Some updates may not be included - see here for how to help out!
Retrieved from ‘https://runescape.wiki/w/Ithell_statue?oldid=35586150’
Categories:
Hidden categories: