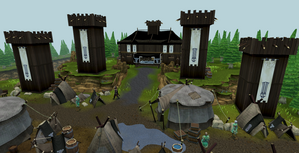 The residence of the Mayor of Prifddinas.

The Prifddinas elf camp is a small camp found at the bottom of the crater within the walls of the reverted Prifddinas. It is visited during Plague's End, wherein players infiltrate it in search of the Iorwerth master plan.

It is ruled by the Mayor of Prifddinas, and can only be accessed during the quest via a staircase in the Prifddinas under city. The camp consists of some tents in extremely poor condition, full of starving elves. Although the mayor is having food flown in from Arposandra, it is for her alone. The Mayor's building can be found to the north of the camp, which is in much better condition than the tents. 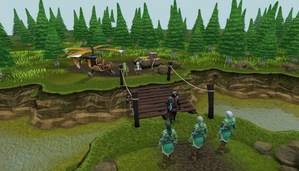 Arposandran gnomes and their food for the mayor.

A river can be found to the south and west of the camp, and thick forest around the east and north, which prevent access to the rest of the crater.

This information has been compiled as part of the update history project. Some updates may not be included - see here for how to help out!
Retrieved from ‘https://runescape.wiki/w/Prifddinas_elf_camp?oldid=35642543’
Categories:
Hidden categories: