From the RuneScape Wiki, the wiki for all things RuneScape
< Plague's End
Jump to navigation Jump to search

Plague's End was released approximately five years after the previous elf quest, Within the Light. It used to be the top contender for the 200th quest to be released, but the release of the first dragonstone Power to the Players poll in January 2014 changed this.[1][2] One of the quest design's aims was to create a very long quest.[3] Mod Osborne later stated that he imagined it to take at least as long as Ritual of the Mahjarrat.[4]

After the release of the poll on 13 January 2014 Mod Osborne's Q&A took place, giving more information about the quest. It was revealed that the quest would be released after the release of the first parts of Prifddinas with other story content explaining how the city had been restored from its seed form,[5] although this later changed to completion of the quest being required for the entirety of Prifddinas due to player feedback.[6] It was also confirmed that Seren would not be involved in the quest and would receive separate content at an unspecified later date. Prifddinas and the accompanying quest eventually won the poll, beating the Inventor skill by 14,661 votes.[7] 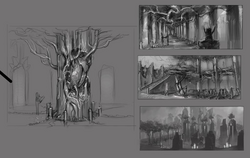 Concept art of the Prifddinas, which will be a reward for quest, as shown at RuneFest 2013. 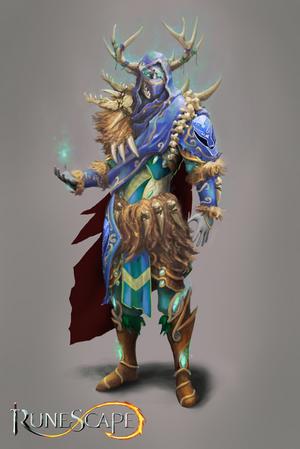 Concept art of Lord Amlodd, one of the eight leaders of the Elven Clans.

A month later, Mod John A announced that he had been appointed lead developer for the quest.[8] In a similar way to Birthright of the Dwarves, he would gather ideas and suggestions for the quest on the forums throughout February and March.[9] He also requested suggestions for rewards for the quest,[10] and a ruby Power to the Players poll released in early April established that a new reward would be made for the quest which would not be a crystal halberd, magic staff or thrown weapon.[11] During the quest's development, Mod John A confirmed that the quest would contain a light puzzle.[12]

Mod Osborne later revealed the quest's requirements in a podcast about Prifddinas.[3] A few weeks later, Making History was added as a requirement due to King Lathas' involvement therein.[13] In the official RuneScape video "Spend your Summer with RuneScape", released on 28 May 2014, the quest title "Plague's End" was first mentioned, after which Mod John A confirmed it to be the quest's title.[14] The quest had usually been referred to as "Mourning's Ends Part III" before, which was also one of the titles considered, along with Dark Lord of the Elves, The Gates of Prifddinas and The City and the Seed.[15] According to Mod John A, the title was chosen to reference the first quest in the series, Plague City, and to sound like a finale.[16]

The quest featured in the Behind the Scenes article for August that year, where it was called a "massive milestone for questers" and described as "a sprawling, two-hour+ Grandmaster quest that'll see you start a revolution, complete light puzzles, seek out the lost leaders of the fabled elf clans, and finally come face-to-face with the legendary Dark Lord himself."[17] Another Behind the Scenes video was released the following week, in which it was revealed that the quest would involve Lletya, the undercity of Prifddinas, its Grand Library, the death altar and the Underground Pass, amongst other things.[18]