A newcomer map is a map sold at many general stores for one coin. It is also sold by Rasolo for one coin and Trader Crewmembers for 3 coins.

The map helps new players of the game find their way around the RuneScape world. The map does not give clear directions, but shows a general view of eastern Asgarnia and western Misthalin, the main F2P area of the game. Before the new world map was introduced, this used to be used more often because of its ability to show your position. However, now, the new world map can do the same, but in more detail, and has a larger range, making the newcomer map almost useless. The only upside to using this map instead of the world map is the fact that it loads up almost instantly, whereas the world map takes time to load and takes up the whole screen. 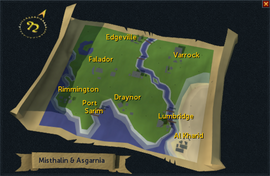 The world, as shown by a newcomer map