From the RuneScape Wiki, the wiki for all things RuneScape
Jump to: navigation, search
The Old School RuneScape Wiki also has an article on: osrsw:Mos Le'Harmless

Mos Le'Harmless is the quaint free port run mostly by pirates that players may visit after completion of the Cabin Fever quest. The isle has a few attractions, such as the Trouble Brewing minigame and the Mos Le'Harmless Caves, where cave horrors may be found. 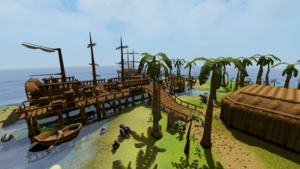 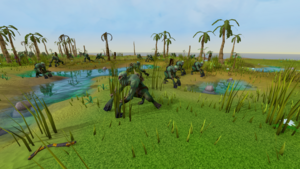 The swamp, found to the north of the island, is home to giant mosquitos, jungle horrors, snakes, and crabs.

In the Mos Le'Harmless Caves: