Priest in Peril is the first quest in the Myreque quest series. It was previously required to enter the region of Morytania. At the command of King Roald, the player must head to the temple of Paterdomus to aid the monk Drezel with recovering the temple.

Start the quest in the Varrock palace by greeting King Roald. He tells you that he has lost contact with a monk, who goes by the name of Drezel and is at the Paterdomus. The king wants you to go check on him and return with any information about the temple.

The temple on the Salve[edit | edit source] 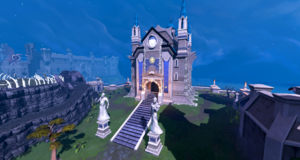 Follow the path out of eastern Varrock to the north-east until you find the musician and then head east to reach the temple located near the entrance into Morytania from Misthalin. Click on the temple door and select "Knock". An unidentified person claiming to be Drezel from inside the temple will ask for help killing the dog nearby. Tell him you will, climb down the Mausoleum entrance north of the temple, and then kill the level 33 Cerberus. A ring of recoil kill will not count for the completion of this battle unless some damage from a weapon is inflicted before it is killed. 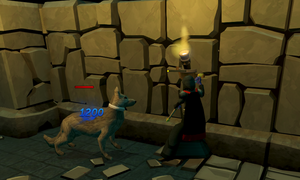 After defeating the dog, go back to the temple and knock again. You will hear the voice from earlier but with a tinge of laughter, telling you to speak to King Roald.

Head back to Varrock Palace and talk to King Roald again. King Roald becomes enraged and explains that the "dog" was guarding the temple from attack from the vampyres and other monsters in Morytania. He instructs you to go back and fix the problem right away. 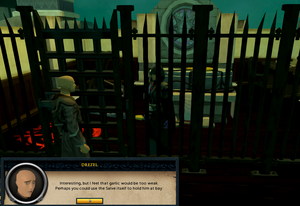 Speaking to the imprisoned Drezel.

Once you reach the temple, you will be able to open the door and see that it has been vandalised and taken over by monks of Zamorak. Go to the top floor, where you find the monk, Drezel, behind bars. Talk to him through the cell door to get to know about the situation in Paterdomus. Drezel starts to tell you about the River Salve and how it was blessed by Saradomin to prevent evil from passing over it. As the river is slowly being corrupted by the evil creatures, Drezel requests you to save the temple and restore Saradomin's presence over it. Drezel will tell you that he can't leave with the vampyre still there and tells you that the water from the river might be able to temporarily seal the vampyre's tomb. 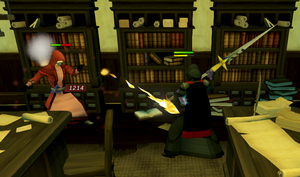 Killing one of the Zamorakian monks in the temple.

Head back downstairs and kill one of the monks of Zamorak to get a golden key. If you try to use it on the door to Drezel's cell, you will find that it does not fit.

Go back outside the temple and climb down the ladder into the Mausoleum again. With the golden key and bucket, go through the gate where the Guardian dog Cerberus was located earlier. After traversing the path, you will see some monuments. Study them; you will notice one of them has an iron key in it. Use the Golden key on the monument to swap keys (If you "Take-from monument" a powerful force will prevent you from taking the key and you will take damage equal to 10% of your current life points). Go to the well in the centre of the circle of monuments and fill your bucket with the water from the river to get a bucket of water. 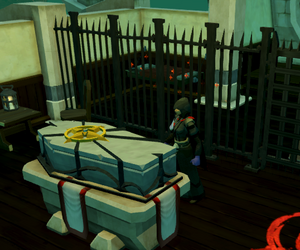 Pouring the blessed water on the coffin.

Now return to Drezel. Use the key you got in the Mausoleum on his cell door and enter it. He will then bless the bucket of water that you filled earlier and give it back to you. Use it on the coffin to seal the vampyre. Drezel will then tell you to meet him in the Mausoleum.

Go back to the monument room and talk to Drezel. He will tell you that the river is still being corrupted. Drezel suggests using the power of a magical rock, the rune essence, to remove the Zamorakian magic and purify the river once again. Talk to Drezel again to give him rune essence. You'll need 50 essence or 25 pure essence; the essence cannot be noted.

You can do it with multiple trips, use runecrafting pouches, or use a wicked hood to save space; however, the hood needs to be charged with at least 50 rune essence or 25 pure essence.

When you have given Drezel all the essence, the river will be re-purified and the quest is complete! 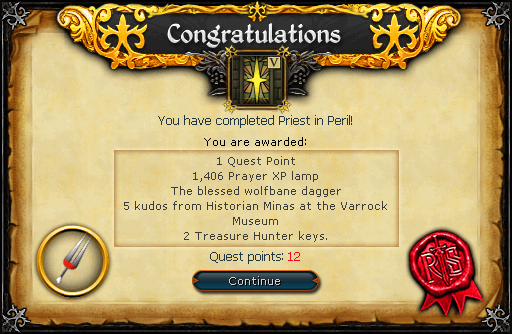 Priest in Peril is directly required for the following quests/miniquests: