From the RuneScape Wiki, the wiki for all things RuneScape
< Nomad's Elegy
Jump to navigation Jump to search

If you fail at any point, just go back in and click on the War Table.

It is recommended to use an Aggression potion for this next part, to keep the focus of the enemies on you rather than the battering ram.

If at any point you wish to leave, go back to the entrance and select "quick leave". When you return, you will resume the fight at the beginning of that phase. If you die, your gravestone spawns outside Death's Hourglass. 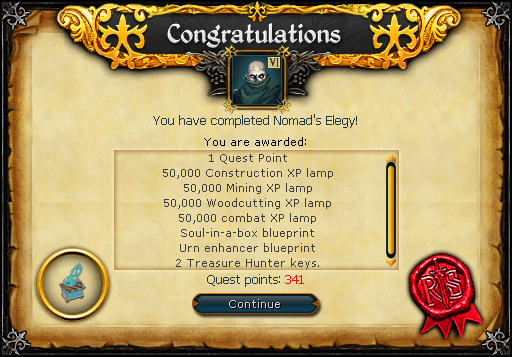 Nomad's Elegy is directly required for the following quests/miniquests:

It is therefore an indirect requirement for the following quests and miniquests:
Retrieved from ‘https://runescape.wiki/w/Nomad%27s_Elegy/Quick_guide?oldid=35822778’
Categories:
Hidden categories: