From the RuneScape Wiki, the wiki for all things RuneScape
Jump to navigation Jump to search
This article is about the Void Knight Korasi. For the weapon, see Korasi's sword.
Commander/Captain Korasi? (edit)? (edit) 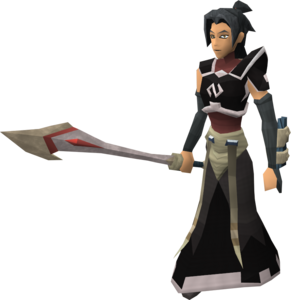 Commander/Captain Korasi is a Void Knight, first met in Quiet Before the Swarm as the sole survivor of an apparent pest attack. During the quest, players assume control of Korasi, the second ever NPC to have this feature, the first being Zanik during The Chosen Commander. When the player is controlling her, they can see that she is equipped with an adamant full helm, adamant platebody, adamant platelegs, adamant scimitar and an adamant kiteshield. The items can be freely equipped and unequipped during this part of the quest, making her the first character a player can change equipment with.

She appears again, now promoted to captain, during A Void Dance. Her main role is to support the player during the quest, usually by guiding them in between various parts, and, during the end, helping to combat the Black Knight Guardian. She also gives a bit of insight into the Void Knight's past, and even goes so far as to recommend Jessika to join as well. 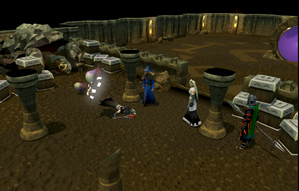 During the events of The Void Stares Back, Korasi acts as a representative of the Void Knights in the alliance of the knight forces. Before entering the portal to the Void, she will give the player her sword. After the unique pest conquest game, she or Jessika must be sacrificed to catalyse the summoning of the Pest Queen. Whichever one the player chooses to save will explode the foodgoo in order to close the Void Portal, while the other will die immediately at the hands of Wizard Grayzag. If Korasi is saved, she returns to the Void Knights' Outpost after the quest. Speaking with Tyr informs the player that she is most likely on the battlefield, as part of her vengeance against the Pests.

During the non-canoncial Gower Quest, Korasi appears in Behind the Scenes if she was killed in The Void Stares Back (if she survived then Jessika appears instead). If Nomad's Elegy is completed, she explains that she is the NPC of the "living" version of Korasi, as opposed to the one encountered in the Underworld. 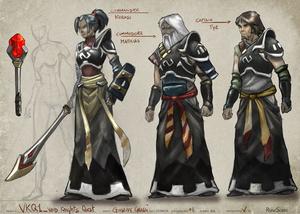 Transcripts Korasi is the author or co-author of: