From the RuneScape Wiki, the wiki for all things RuneScape
Jump to: navigation, search
The Old School RuneScape Wiki also has an article on: osrsw:Animated Rune Armour 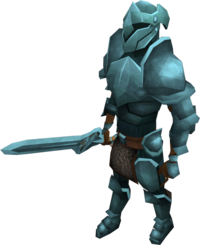 Animated Runite Armour is found at the Warriors' Guild and is the most powerful Animated Armour in the Animated Armour activity. In order to summon it, players must put a rune full helmet, a rune platebody and rune platelegs on the Magical Animator. This is one of the quickest ways to get tokens. Low-levelled players are advised to bring food and wear stab-resistant armour. It is the highest level animated armour. The player may not get all of their rune armour parts back when it is defeated; however, the better defensive bonuses the armour provides, the lower the chances of losing 1 or more parts. It is weak to crush attacks, although any melee weapon will suffice at higher levels. The armour is immune to ranged and magic attacks.