From the RuneScape Wiki, the wiki for all things RuneScape
Jump to: navigation, search
The Old School RuneScape Wiki also has an article on: osrsw:Animated Steel Armour
This article is about the Warriors' Guild variant. For the version summoned by Tarn, see Animated steel armour (Lair of Tarn Razorlor). 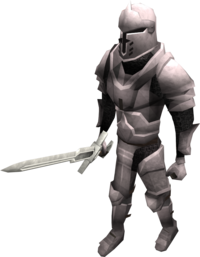 Players with a combat level of 75+ can easily defeat them without any food.

There is a possibility of losing steel full helms while fighting this animated monster.