From the RuneScape Wiki, the wiki for all things RuneScape
Jump to navigation Jump to search
For the cosmetic override, see Dulcin (override). 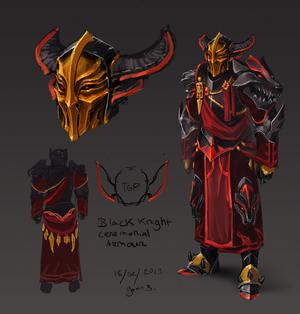 Concept art of the armour.

The Black Knight captain's armour, also known as Captain Dulcin's armour, is a cosmetic armour set obtained and used during The Death of Chivalry quest. It is found in the garden of Edgeville Monastery after starting the quest, and is used to impersonate Captain Dulcin. This armour will make the wearer appear male if they are female.

After the quest it serves no useful purpose, apart from using it to enter the Black Knights' Fortress and can be reobtained from the same location. It is made up of five items, none of which have any bonuses:

A full set of this armour can be stored in the armour case of a player-owned house.

This information has been compiled as part of the update history project. Some updates may not be included - see here for how to help out!
Retrieved from ‘https://runescape.wiki/w/Black_Knight_captain%27s_armour?oldid=35761548’
Categories:
Hidden category: