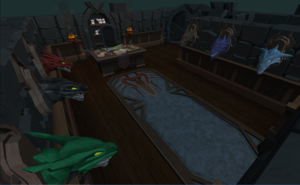 Captain Dulcin is a deceased overseer of the Black Knights' Fortress, who was instated after the War of 164, which he spent in hiding. He is descended from Lord Shadwell, a former Lord of the Kinshra. An avid hunter, he had many dragon heads in his office, including that of a mithril dragon. Dulcin expressed a particular hatred towards women and mages, refusing to allow them to join the Kinshra, describing them as "bearers of children" and "weak wizards". He was generally regarded as cruel and was feared by most of his men. Dulcin's rule made a permanent impact on the Kinshra and their fortress; the various cruel torturing mechanisms were his initiative, as well as the use of slaves, whose tongues he would have cut off.

During The Death of Chivalry, the player impersonates him to infiltrate the Black Knights' Fortress. Most of what is known about him comes from Captain Dulcin's journal. He led an expedition to find the Wand of Resurrection, the location of which they discovered after ambushing a group of White Knights. Lord Daquarius hired Lensig the witch to perform a ritual and teleport them to the location, the Tomb of the Fallen. He killed Fern, the guardian of the wand, and Lensig dispatched the matching puzzle, but they were unable to pass the blood ward.

Unbeknownst to Dulcin, Lord Daquarius secretly hired Lensig to kill him and assume his identity. She successfully did this by poisoning him and stealing his ceremonial armour to disguise herself.

Transcripts Captain Dulcin is the author or co-author of: