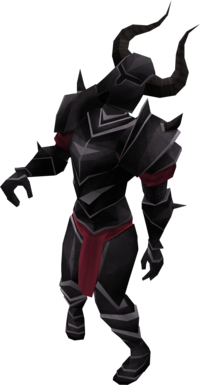 Black Knight zombies are enemies fought during The Death of Chivalry quest. They are re-animated bodies brought back to life along with Sir Owen by Dawn after she acquires Elora's Wand. In the quest there are 2 of them. Like all of the monsters during this quest, their life points are scaled to match the player's level. Upon death they fall to the floor instead of disappearing, and can be searched for small amounts of coins.

They appear as regular black knights, but moaning and limping, since they are zombified. They deal very little damage as they will only grab something and attempt to rip it off.