The Blade is an Elder God artefact created to better shape the other creations of the Elder Gods.[1] It played a large role in the history of Guthix and Gielinor; it was what turned Guthix into a god and enabled him to discover Gielinor along with many other realms and dimensions.

When investigating the shattered blade on the table it reads, "The shattered remains of this blade are emitting sparks. Pieces are clearly missing, rendering it irreparable even if it was safe to touch."

The sword was first seen being wielded by Skargaroth. Later on, Skargaroth found the Naragi plane, along with Tuska, a boar-like goddess, and managed to blind her in one eye. In retaliation, Tuska gored Skargaroth with force enough to push him onto the storm cellar that sheltered Guthix's only daughter, Aagi, forcing Skagaroth to drop the sword in the process.[2] In his rage over Aagi's death, Guthix grabbed the fallen sword, which he used to blind Tuska's other eye. After that, he took the sword and impaled it deep in Skargaroth's back, killing him and unintentionally stealing his powers and some of his memories, becoming a god.[3][4] 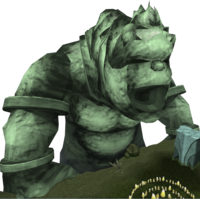 Skargaroth, slain by the sword.

Guthix, the main user of the sword.

Guthix then discovered that with cuts from the sword, he could open gateways to various dimensions and planes. For many centuries, he started travelled through dimensions until he found Zanaris, and its planet Gielinor. At some point Guthix discovered the planet Renmark, which had a parasite feeding on its core. Seeking to destroy the creature, Guthix struck at it using the Blade but inadvertently shattered the planet instead. The parasite survived the destruction, as did several fragments of the former planet. Guthix however discovered, that the cuts he made using the Blade, caused the fabric of time and space to fray, which meant he was forced to be much more careful, when using the Blade, also fearing that the parasite, Mur, might have been able to latch unto the pathways he created.[5]

Guthix accidentally shattered the Blade when he cut too deep into the fabric of time and space and piercing the Void, which caused the Void pests to swarm unto Gielinor. Guthix placed Valluta as a guardian to defend against the pests.[6]

Although the Blade was destroyed, and with no possible way to repair, as only an Elder God would be able to[source needed], Guthix found some use for the pieces. Using shards of the broken Blade, Guthix used them with the Stone of Jas to create the World Gate,[7] which would allow its user to travel over immense distances to many different worlds. Guthix used the gate to stabilize the gaps he created as well as populate the realm of Gielinor.

The Blade currently lies broken on a table in the entryway to Guthix' chamber complex, too broken and incomplete for any use and too dangerous to touch, it was found by an adventurer, who would later become Guthix's World Guardian. After discovering the theoretical blueprints of an Aviansie inventor called Howl, the World Guardian returned to the chamber and managed to salvage a fragment of the Blade, which they made into The Subtle Blade, an artefact, which would allow them cut thorugh the fabric of reality and into the Abyss.

The sword has various special abilities. It is naturally electrified, it is powerful enough to injure and slay gods, and it can open gateways with simple swings in the air.[source needed] It can even destroy planets by shattering them into fragments, which is how Guthix accidentally destroyed Renmark.[5]