From the RuneScape Wiki, the wiki for all things RuneScape
Jump to: navigation, search
This article is about the Aviansie inventor. For the summoning scroll, see Howl scroll. 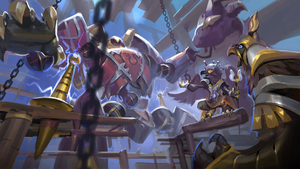 Howl is the codename for an Aviansie inventor who died during the God Wars when the Stormguard Citadel was destroyed. Before his death, he was working with aetherium.[1]

Howl, along with other skilled aviansie artisans, were sent to Stormguard Citadel to research and develop weapons for Armadyl's forces. He and the other aviansie were advised to give themselves codenames in the event they needed to leave or were captured, so he called himself "Howl" in reference to the howling winds across his workshop.

His first creation was the blackfire lance, a rudimentary rifle of sorts that could fire from a distance akin to bows, although it was only able to fire one shot before being discarded. He intended to improve on the original design by increasing its range, accuracy and allowing for more shots to be fired per clip. [2]

Soon realising the importance of Aviantese sight that not all of them were blessed with, he soon commissioned the development night vision goggles so that his fellow allies could see well in the dark. He was also working on portable and static telescopes, with those utilising air and fire to be successful, although his earth and water ones were failures. Upon hearing that some of his fellow inventors were using it to see the earth and sky, he expressed an interest in microscopy. [3]

Soon after, one of his fellow inventors, Chay'ot, suffered a wing injury that prevented them from flying again. Due to the discovery of quintessence, he began crafting a wingsuit to help the injured and their human allies have some degree of flight, although it was only limited to the surrounding islands of the citadel. Further wingsuit improvements were in development, namely increased control and a failsafe mechanism. [4]

He was then tasked by the commander to develop the wingsuit for combat purposes, which he stated was not its purpose. Regardless, he complied with the order, having looked for a way to make it combat-worthy in the air. He decided that he would also look into magical force deflectors and protective shielding. [5]

Eventually, he discovered the source of quintessence and developed a counter to make its harvesting significantly easier. Needing more metals to experiment on, he had the spy Mat'ahar'i deployed to Everlight, the Infernal Source and Warforge to obtain everlight silvthril, hellfire metal and warforged bronze. By extracting their essence and blending it with quintessence, he invented aetherium alloy. Noticing the alloy's potential to slay a god, he soon developed three weapons from it - a staff, bow and sword. Further experimentation with these weapons made him conclude that direct contact had the most promising results, so he devoted more time to melee research. This in turn would lead into the development of the powerful godsword. [6]