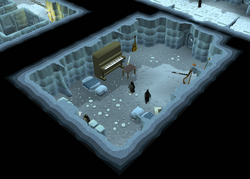 Pong and Ping in their room on the iceberg.

Ping and Pong are a pair of penguin musicians that feature in the Penguin quest series. Due to their lack of thumbs, they are only known to play two instruments, the cowbells and bongos. They are initially working with the KGP, but leave their service during Some Like it Cold to further their career. Their fans include a number of seals who do not normally like penguins, and even Death, although their music is hated by a number of other penguins, including a KGP agent and Pescaling Pax himself.

Their songs include There once was a Pescallion, Rockhopper Penguin, and The wheels on the boat go up and down. They also have an album titled Cowabongo.

During Cold War, players have to help the duo find instruments that they can play without thumbs so they can distract a KGP guard and allow the player access to the war room. After the player brings them some cowbells and a set of penguin bongos, the nearby guard comes and yells at them for the noise, allowing the player to sneak past. During Hunt for Red Raktuber, they help players compose a song to put the same guard to sleep so they can access the war room yet again. Once the song is composed, it puts the guard to sleep, and he begins to have nightmares about the penguin 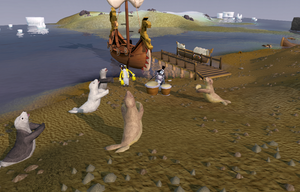 Ping and Pong perform for some seals.

During Some Like it Cold, the player finds the duo practising outside the KGP base, and they reveal that they were fully aware that the player was a human, but thought it was something they had to reveal on their own terms. Players then make them a pop costume and a rock costume so they can accompany the player to the Prisoner of Walrus Camp, as the seals of the camp are big fans of the duo, and will only allow the player there if Ping and Pong accompany them. Once on the camp, Ping and Pong hold a small concert to act as a distraction while the camp is blown up and Ping, Pong, the Player, Teddy, Larry, Astoria and Plaza escape on a submarine. Once back at shore, Chuck of the PBJ allows the two former KGP-associates to leave due to their help, provided that they never return to the iceberg. They agree to this, as they wish to go on tour.