From the RuneScape Wiki, the wiki for all things RuneScape
Jump to navigation Jump to search
The Old School RuneScape Wiki also has an article on: osrsw:Penguin Agility Course 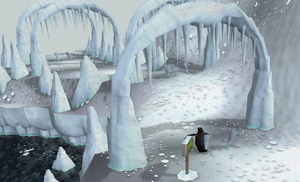 Maneuvering underneath the icicles

The Penguin agility course is located on the Iceberg, and requires an Agility level of 30. Players also need partial completion of the quest Cold War, and must be wearing the clockwork suit.

This course offers much higher experience than the Barbarian Agility Course, but requires a lower Agility level. Three of the four obstacles on the course can be failed - the crushers can deal damage, but it is not necessary to do them again - however the damage taken is negligible.