From the RuneScape Wiki, the wiki for all things RuneScape
Jump to: navigation, search
The Old School RuneScape Wiki also has an article on: osrsw:Icelord

Icelords are icy beings that live inside the Iceberg, and were found when Pescaling Pax moved much of the Penguin population to the Iceberg to prepare for the invasion of Gielinor. They have four arms, and are quite adept in using these to pummel their enemies into submission, while some prefer to hurl large icicles at adventurers. Pescaling Pax intends to use these as a strike force when they do invade the mainland.

Icelords are first encountered during the Cold War quest. They are in a cage on the penguin's Iceberg that is explored during the quest. After the quest is finished, they can be accessed by entering the "Ice block" in the northwest section of the iceberg, and re-entering the cage.

Inside the cage, there are four Icelords which use melee, and one wielding icicles which uses Ranged. They are weak to fire-based Magic spells and slash attacks, so it is recommended to use Fire Bolt or better for the melee one and dragon metal or better for the ranged one. 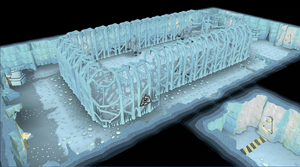 Four icelords have been captured by the KGP.

The main reason for making the trip back to fight them is because they can be used as a replacement for Ice warriors during a Slayer task. They provide more experience compared to Ice warriors, giving a slight boost in experience over the task. They also have "advantage" of only having three drops: big bones, long bones, and curved bones. This negates the need for banking, therefore allowing them to be killed much more efficiently. It is recommended that players bring a half-inventory of inexpensive, yet high-healing food, such as Cake. These creatures do not hit hard or frequently, but players should still be wary of the accumulation.