From the RuneScape Wiki, the wiki for all things RuneScape
Jump to navigation Jump to search
Penguin (dwarf)? (edit)? (edit) 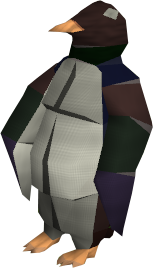 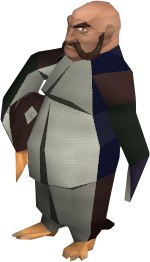 A dwarf in a penguin suit appears at the end of the Hunt for Red Raktuber quest, alongside Pescaling Pax, KGP Guards and Larry. He explains that he, Glosur, Obert, Medwin, and Baden are former members of the Red Axe, and that they tricked the player into redirecting the submarine instead of disabling it.

Unlike the other dwarves, this dwarf doesn't appear in the Iceberg War Room.