From the RuneScape Wiki, the wiki for all things RuneScape
Jump to navigation Jump to search
Wikipedia also has an article on: wikipedia:Walrus

The Walrus is the leader of the floating Iceberg prison camp in the Northern seas, and is the main antagonist of Some Like it Cold.

Prior to the Walrus' appearance in the Northern Sea, the polar bears and the seals had shared the water and the land of the Northern Coast and Seas and had the penguins as their shared servants.

Eventually, the Walrus appeared and united all the seals into a massive organisation, which took control of the Northern Seas and aimed to completely enslave the penguins under their rule instead of sharing with the bears. It was due to this attempted hostile takeover that The Pescallion formed the KGP and began his plans for world domination.

Prior to Some Like It Cold, the Walrus had captured the Red Raktuber submarine along with its crew and Larry, who was being held prisoner. PBJ Agent Teddy was sent to the camp to investigate and was captured himself. However, during Some Like It Cold, the player helps repair the Raktuber and aids Larry and Teddy in escaping, along with Noodle, Astoria, Plaza and Ping & Pong.

The Walrus speaks with archaic words, complex sentences and Infernal tongue[1] phrases to display his superiority above his seal minions. He enjoys eating penguin eggs for dinner and is easily irritated by loud noises. 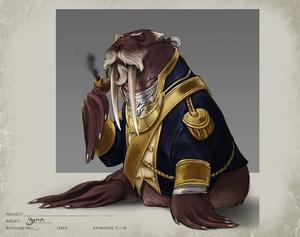 Transcripts Walrus is the author or co-author of: