From the RuneScape Wiki, the wiki for all things RuneScape
Jump to navigation Jump to search
For the achievement, see Some Like It Cold (achievement).

Some Like it Cold is the sequel to Hunt for Red Raktuber and is the third quest in the Penguin series. The quest was released on 7 August 2012.

Teddy - an agent of the PBJ - has gone missing while on the trail to find Larry. Chuck has received a ransom note from the Walrus and has asked you to investigate. Become a roadie for the famous Ping and Pong and break into a PoW camp to save Larry.

Go to the Ardougne Zoo and speak to Chuck the polar bear. He will tell you that his agent, Teddy, was caught spying on the Penguins while gathering information about Larry, and was made a PoW (Prisoner of Walrus). Chuck will give you a ransom letter to read from the walrus. Players will now be notified to find the seals in Rellekka near the rock crabs. Speak to Chuck again for a teleport to the Rellekka dock.

Convincing the seals to allow you inside[edit | edit source] 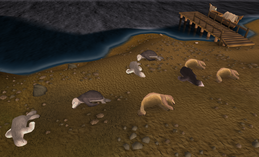 Wake up the seal near the rock crabs on the beach, and choose the option "I'm looking for a Polar Bear". He will be uncooperative. Next choose the option "How can I entertain you?". Use the jump for joy or dance emote (not all emotes work) and talk to the seal again. Ask about the Penguins and then about his band. He will explain "Where all Penguins Live" and tell you that his favourite band is oppressed by "some guard". 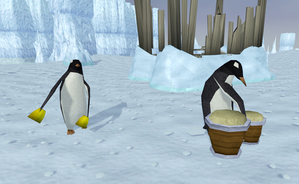 Ping and Pong performing on the iceberg.

Use Larry's old boat (which is the smaller of the 2 boats just north of the seals) to travel to the Iceberg. Approach Ping and Pong, who are standing right next to the landing spot.

Ping and Pong inform you they were not fooled by your Penguin suit, and a humorous dialogue follows. After speaking with them, they ask you to make a Rock costume and Pop costume in the War Room in the penguin glacier, or a Crafting table in your POH. They provide you with the following materials to make them:

If you lose any of these supplies, you will have to re-obtain them yourself.

You have two choices to make the suit:

Go back to Ping and Pong and give them the suits.

Tuxedo-Time out of your penguin suit, take the boat back to the seals and wake the seal to activate a cutscene. Afterwards, talk to the seal again to be transported to the PoW Camp. You cannot wear any items or have anything in your inventory, but at this point you will be given the option to bank your items. 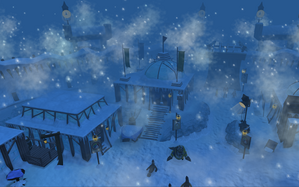 The Prisoner of Walrus (PoW) camp.

When you arrive at the PoW Camp talk to Teddy, the bear in a clown suit. Then talk to Larry (who is in a penguin costume and is a bit unhinged). 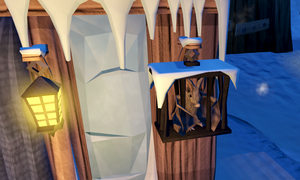 The bat in a box.

Return to Teddy and then talk to Noodle (located south, by the gate). Noodle may not appear in the building, at first glance. It seems as if this NPC appears when the player speaks to Teddy. If Noodle does not appear, simply speak to Teddy again or exit the camp.

Attempt to enter the building that Walrus is in (located in the south, east of the gate). This will initiate a short monologue by Walrus, confirming that he has an egg.

Take the bat in a box from outside The Walrus's house. Then encourage Teddy, Bouncer (the seal at the south eastern part, with the other seals) and Ping & Pong to make enough noise to get The Walrus out of the tent. Continue clicking on all four characters, maintaining their sound levels for a couple of minutes. The character bars should all be blue. (Ping and Pong count as a single entity during this part of the quest. Although they have separate progress bars for noise, clicking on one of them encourages both. You still need to repeatedly click on all four characters individually to progress though.) After 3 angry dialogues from The Walrus, he will grow increasingly annoyed, and eventually will approach the penguins to complain. 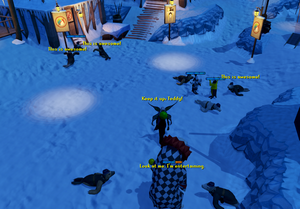 When he walks outside, click through his dialogue until your character says you should go inside and get the egg. If you try to enter his tent before clicking through the Walrus' dialogue the cut scene will end and you will find yourself back at the gates to the camp. If this happens, simply attempt to enter the Walrus' tent and he will come out again. 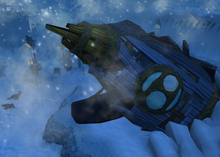 Enter the tent and steal from the table to get the egg. Walk out and give it to Larry. Talk to Teddy after that. He will ask you to talk to all 6 unnamed penguins to gather ideas on how to escape. Talk to Teddy then talk to the 6 penguins. There are four wandering in the central area, one hidden between the buildings to the north of Larry, and one in the northeast corner near a fishing hole. Report back to Teddy after speaking to all 6 penguins. He will tell you to talk to the older penguin, who turns out to be Plaza, the chess playing penguin by the kitchen. Plaza gives you a list about how to make Battlefish - a Battleship style board game.

Here are the steps for gathering the supplies for the game set: 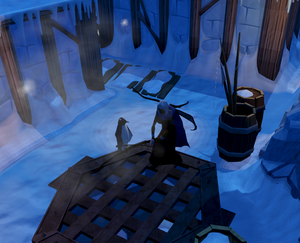 Fishing for the Shark Tooth and Squid.

Once you have all the supplies:

Give the blueprints to Teddy. He tells you that there is a problem with the engine. After going through the dialogue, return to Astoria and ask her for help. She will only provide help if you defeat her in a game of Battlefish. 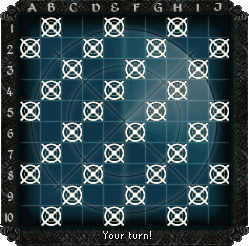 One pattern that is guaranteed to hit all enemy ships at least once.

If you've played Battleship, this should be relatively easy. The shortest piece in the game is 3 squares - therefore, you should space your shots out by 2 (vertically and horizontally) from your previous shot if it is a miss. A good starting method is to hit the centre first (E5, E6, F5, F6) since there is almost always a ship there. Fire at only one of these 4 spots. Assuming you chose E5, your next shots would be B5, H5, E2, and E8. Slowly work your way out from there by choosing shots that are 2 squares apart. If you get a hit, check the squares to the north, south, east and west of it until you get another hit, then continue that way. If you get a miss, go the opposite direction. Example: Say you have a hit at E5 and E6, but get a miss at E7, reverse direction would be E4, as that is the next square in line with the other hits. See below for an example of how to implement the 2 square spacing. Also, if you manage to sink both 3 square pieces and still have to find one or both 4 square pieces, you can change the space between the squares to 3. AI can place the battlefish at the edges.

If Astoria says, "Ha! You missed!", it's an indication that one of her Battlefish is close to your last shot (usually around two to three spaces away).

If you happen to fail, but have hit a battlefish, the battlefish will still be in the same spot when you restart.

After defeating Astoria in Battlefish, go to the circus supplies storage building directly south. Search the Circus prop crate to recover circus props (a single inventory item) and return to Teddy. You will then have to repair the engine of the submarine. 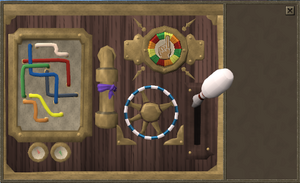 When done, talk to Teddy again. 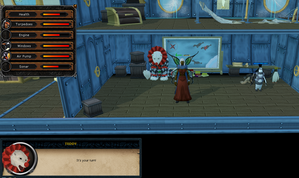 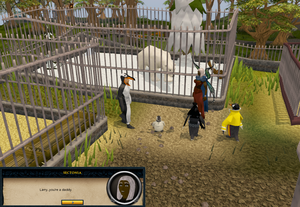 There are two ways to attack the end puzzle of the quest. Either keep workers assigned to fixing the sub and hope to torpedo the other ships, or try to destroy the other ships by winning the battlefish game before your own ship is destroyed.

It's paramount to keep your workers assigned to fixing the sub, as the bars will decrease if no worker is assigned to them. Players should keep an eye on the characters, as their spawning rate is quite fast. As soon as you see that they have regained the ability to work again (a full blue bar, rather than orange) you can assign them to another role. If their bars are not as blue, you may still assign them roles. This will simply cause them to stop working sooner. Continue to play Battlefish while doing this (you return to the board by looking through the periscope in the left room). Teddy will alert you when it is your turn. If you are too busy assigning roles or simply not on the game screen, you will randomly fire at a spot on the board if someone is assigned to torpedoes.

Over time, the submarine will gradually lose health. Getting hit will decrease your sub's maximum health. You can regain health by repairing the ship where needed, but once your maximum health decreases, there's no way to get it back up unless you die or log out. The health bar is reset for every seal ship you destroy. This means finding the opposing ships should be the first objective.

The enemy battlefish are located at horizontal 1H - 1J, horizontal 4D - 4G, and vertical F6 - F9. If you are spam clicking on those squares, you will get a hit as soon as it is your turn, and destroying an enemy sub will heal you fully, letting you just spam click to completion.

Unlike the previous game, the seals have two size 4 ships and one size 3 ship. Try centre and upper right first. When you find most squares of a ship, hunt for other ships until your health is low, and then finish destroying that first ship. Your health is fully restored every time you sink a ship. This will give you enough time to win the game.

If you accidentally click outside the game and it exits, you can re-enter by opening the door to the left and clicking on the periscope.

Though it does not always work, it is possible to win without assigning any roles by finishing the game of battlefish as quickly as possible. This requires <10 mistakes and quick clicking on the player's part. The submarine will lose almost all health, but the quest will be completed nonetheless.

If you die you will appear in front of the Grim Reaper with Ping and Pong. After a short dialogue, leave through the portal and you will appear near the boat to travel to the iceberg. Wake the sleeping seal to return to the sub, where you start over.

Logging out will change the positions of the enemy ships. Enemy ships may stay in the same location after death so check those areas first. Remember, you must get all ships in one go. You may retry shortly after by waking the sleeping seal.

When you destroy all of the enemy ships, you are taken back to the Ardougne Zoo, and after a short cutscene, the quest is completed. 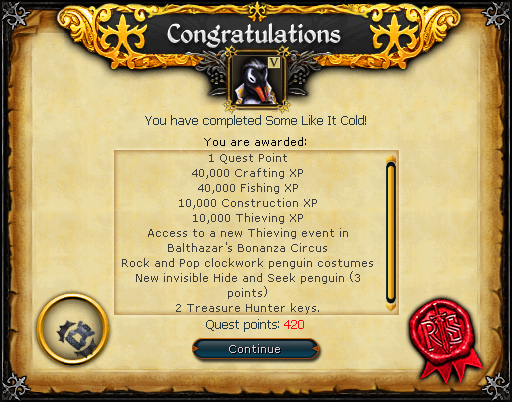 Some Like It Cold is directly required for the following quests/miniquests: