From the RuneScape Wiki, the wiki for all things RuneScape
Jump to: navigation, search
This article is about penguins as a race. For other uses, see Penguin (disambiguation).

Penguins (Spheniscidae callidus) are a race of flightless aquatic birds known to inhabit frigid, snowy regions. Penguins are one of Andrew Gower's favourite animals[1], revered in a manner similar to Bob the Jagex Cat, and have therefore been included in many aspects of RuneScape. Notable items honouring penguins include the penguin mask and penguin staff, both obtainable from the Treasure Trails minigame. Penguins originate from the Motherland, its capital being Palingrad.

While some penguins, such as those found at Here Be Penguins, are apparently benign and unintelligent, presumably not part of the Pescallion's organisation, the penguins found on the Iceberg have organised themselves into a cunning and militant organisation known as the Killer Gentoo Penguin, or KGP, led by The Pescallion. One of his sons, Pescaling Pax, rules the Iceberg. Their goal is to destroy all humans and take over Gielinor. They are incredibly adept at technology, and have created a number of advanced infrastructures, including a sophisticated underground lair and an enormous fully functional submarine known as the Red Raktuber. 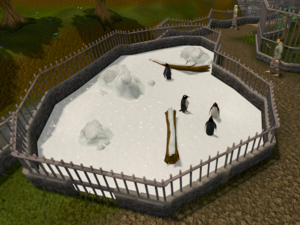 KGP agents in the Ardougne Zoo.

Penguins are the central focus of a quest series that started off with the release of Cold War. During the quest, players meet Larry, a zookeeper at the Ardougne Zoo who, after years of observing the penguins, suspects that they are evil. The player helps Larry study the penguins and infiltrate the KGP headquarters on the iceberg and uncover their intent to invade the world. The player narrowly escapes with their life.

In the next quest, Hunt for Red Raktuber, Larry calls on the player to help him investigate a series of mysterious sightings off the shores of Gielinor. After investigating, the players sneak on board the Red Raktuber and meet Marlin a penguin captain who has been taken over by a Sea slug. At the end of the quest, Larry is captured by the penguins and the player is left marooned on a desert island. Players escape with the help of Chuck the polar bear, a member of Polar Bears for Justice which is an organisation created to monitor and resist the penguin invasion. 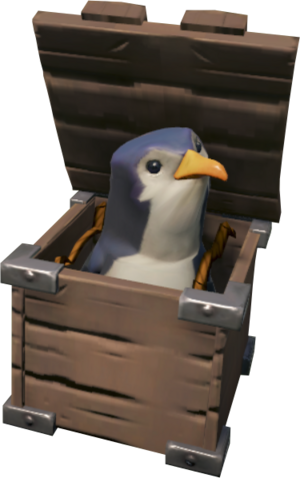 A penguin spy in disguise

Penguins are heavily involved in the Penguin Hide and Seek Distractions and Diversions. Players can start it by speaking to Larry or, after Larry is captured in Hunt for Red Raktuber, Chuck in the Ardougne Zoo. They are asked to spy on penguin intelligence gatherers which are found all over RuneScape disguised as crates, rocks, and other innocuous objects. Players get points for each spy they find, and there are 10 spies out at a time. The penguin spies reset weekly on Wednesdays. After Hunt for Red Raktuber, players can get an extra point by locating a PBJ agent hiding in a random well.

After completing Hunt for Red Raktuber, players gain access to the Penguin Hunting Area, which was designed as an efficient location to train hunter. There, players can hunt penguins using tracking, net trapping, deadfall trapping, box trapping or protean traps. All supplies needed to catch the penguins can be obtained in the area by searching the ruined boat at the south-east corner of the hunter area. Players can also fish cod to use as bait in their traps using small fishing nets which are also obtainable from the ruined boat.

Players with 30 Summoning may keep penguins as pets. Penguins caught in the Penguin Hunting area cannot be kept as pets, however. Instead they must talk to the Penguin keeper in the Ardougne Zoo who will give them a penguin egg. Players must incubate the egg in a pet shop for a couple of hours (2 Hours). When it hatches they will have a penguin chick. Pet penguins need to be fed raw fish of any kind or else they will run away.

Wikipedia also has an article on: wikipedia:Penguin