An Ancient crozier is a piece of the Ancient vestment set. It can be obtained by completing an elite clue scroll as part of the Treasure Trails Distraction and Diversion. The crozier is wielded as a staff in the weapons slot, although it is not possible to attack with it equipped.

This item, along with the rest of the set, can be stored in a treasure chest in a player-owned house. 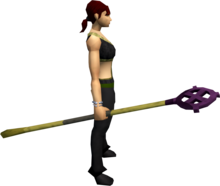