An Armadyl crozier is a piece of the Armadyl vestment set. It can be obtained by completing an elite clue scroll as part of the Treasure Trails Distraction and Diversion. When worn, this item protects the player from Armadyl followers in the God Wars Dungeon. The crozier is wielded as a staff in the weapons slot, although it is not possible to attack with it equipped.

This item, along with the rest of the set, can be stored in the level 4 (elite) section in the treasure chest in a player-owned house. 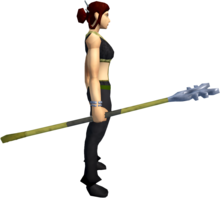