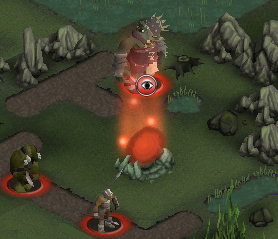 Yoykrad guarding the portal in Armies of Gielinor along with an Ork and Hobgoblin.

Yoykrad was a Bandosian ourg active during the late God Wars. He appears only in the FunOrb game Armies of Gielinor.

In Armies of Gielinor, Yoykrad appears on the "Portal" level of the Guthix Awakens campaign. During the battle, he is a leader amongst a Bandosian military force located in a swamp. Whilst he guards the Bandosian portal, an army of orks, cyclopes, ogres, goblins and hobgoblins advances upon the Guthixians. His ultimate fate is left unclear.