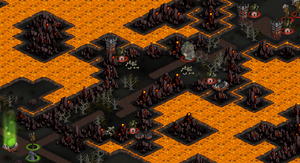 Blorgak leading the charge to break through the mountains.

Blorgak was a Bandosian ourg active during the God Wars. Mat'ahar'i wrote in the mission report about the acquiral of warforged bronze samples that Blorgak was assigned as the undercover spy's sales rep.[1]

Blorgak also appears in Armies of Gielinor as an enemy unit during "Seat of Bandos" level of Guthix Awakens campaign. Blorgak guarded The Seat of Bandos, a fortress in what is now the Wilderness, surrounded by an impassable mountain range. Bandos had spied upon the Guthixian troops' approach, and commanded his minions to advance against them. Blorgak led the charge that created an opening in the mountains, which ultimately backfired, as the opening he created made it possible for the Guthixians to invade and conquer the fortress. Although the player has to defeat Blorgak to complete the mission, Blorgak's ultimate fate is left unclear.